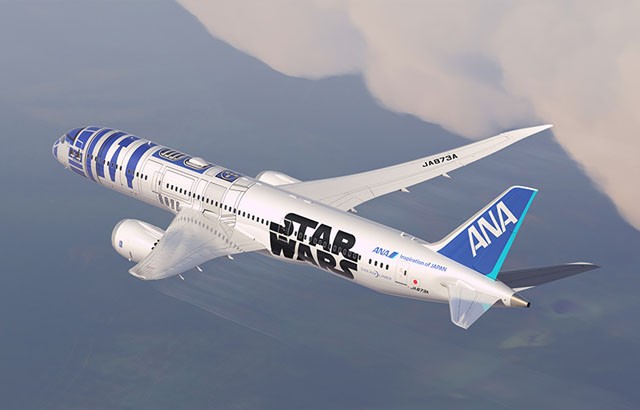 R2-D2 seen on the livery of one of ANA's three Star Wars–themed aircraft.

Star Wars fans in Singapore will soon be able to get a closer look at ANA’s highly-anticipated Star Wars–themed aircraft when the plane makes a brieft two-night stop at Changi Airport on November 12 to 14, its first stop outside of Japan. Up until October 25, a total of 20 fans of the sci-fi series will get a chance to win a pair of tickets to tour the R2-D2 ANA jet—one of the three Star Wars-themed planes by ANA and Disney—by participating in contests held on ANA’s website and Changi Airport’s Facebook page. Lucky winners will be able to experience a unique three-hour tour of the aircraft on November 14, which includes a film showing of one of the movies from the Star Wars saga and in-flight meals—all in the comfort of a business class seat.

“The R2-D2 ANA jet has received tremendous interest from around the globe, and we are delighted to be able to partner with Changi Airport to share this exclusive experience with fans in Singapore,”  said Mitsuo Tomita, ANA’s vice president of marketing and sales for Asia and Oceania.

The aircraft has also been scheduled to fly between Tokyo and Vancouver in Canada; Seattle and San Jose in the US; Munich, Paris and Brussels in Europe; Sydney, Australia; Beijing, China; as well as Jakarta, Indonesia.