The aviation deal looks set to support more than 75,000 jobs in the United States. The 2017 Dubai Airshow was filled with thrills and spills for aviation enthusiasts.

Apart from wowing attendees with its upgraded first-class cabins, Emirates also announced a commitment to purchase 40 787-10 Dreamliners from Boeing.

The deal, which includes airplanes and related equipment, is valued at $15.1 billion at current list prices.

In selecting the 787-10, Emirates complements their 777 fleet with a medium twin-aisle airplane, which offers 25 percent better fuel efficiency per seat and emissions than the airplanes it replaces.

According to the U.S. Department of Commerce formula, a deal of this size would support more than 75,000 direct and indirect jobs in the United States.

His Highness Sheik Ahmed bin Saeed Al Maktoum, chairman and chief executive of Emirates Airline and Group said, “Emirates’ orders today will be delivered from 2022, taking the airline well into the 2030s.

“Some of these will be replacements so that we maintain a young and efficient fleet, and others will power our future network growth. We see the 787 as a great complement to our 777 and A380 fleet, providing us with more flexibility to serve a range of destinations as we develop our global route network.”

Not only is the 787-10 the largest member of the Boeing 787 Dreamliner family, it is also the fastest-selling twin-aisle airplane in history. 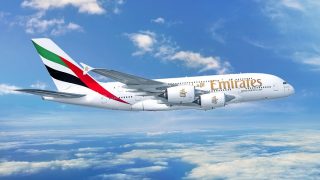 Emirates A380s Will Return to Tokyo Narita Next Month

The decision was driven by surging demand for travel into Japan given its eased entry restrictions.