Finnair will soon become the first airline in Europe and the third operator in the world to fly the Airbus A350 XWB when it takes delivery of the new aircraft in October. The new fleet has been scheduled to serve both long-haul and short-haul flights, starting with the Helsinki—Amsterdam route on October 9 and followed by the Helsinki—Shanghai route on November 21. Finnair acquired a total of 19 A350 XWBs, which will later on be assigned to serve the airline’s Singapore, Hong Kong, Bangkok, and Beijing routes. Designed by Finland-based dSign Vertti Kivi & Co., the new aircraft’s interior oozes a futuristic touch with its soft white-and-grey color palette. Passengers will be able to enjoy a range of enhanced in-flight entertainment features on board, such as Wi-Fi access, fully-flat business seats, and an improved dining menu. 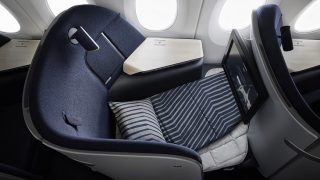 Regular services between Helsinki and Japanese destinations have been suspended, but the airline is ...

Travelers will be flown four times weekly on a new routing that will lengthen journey times by a few...