This week Lufthansa became the first airline to take delivery of a Boeing 747-8 Intercontinental passenger aircraft — the world’s longest. Much of the media focus of late has been on the innovative Dreamliner 787, but this aircraft merits serious attention. The plane features futuristic LED lighting, spacious interiors, and a curved staircase leading to an all-business-class upper deck.

The seats in that cabin are a new premium product from Lufthansa, converting to lie-flat beds 1.98 meters long at the push of a button. The seats are positioned so that two neighboring seats angle toward each other, converging at the feet (see pic below). Fifteen-inch TV screens will also be featured in this class.

Lufthansa will employ the 747-8I on its service between Frankfurt and Washington D.C. starting on June 1. Tickets can be booked now. Four more of the aircraft are scheduled to be delivered by year’s end to Lufthansa, which plans to use them on routes to New Delhi, Bangalore, Chicago, and Los Angeles.

The plane offers eight first-class seats, 92 business-class, and 258 economy. The airline is running a Facebook contest awarding two tickets on the inaugural flight.

As Boeing’s largest passenger aircraft, the 747-8I competes against the A380 from Airbus. The latter has a big head start, having been deployed by many airlines (including Lufthansa) since Singapore Airlines became the launch customer in 2007. The new business class seats seen from the side. The new business class seats seen from behind. 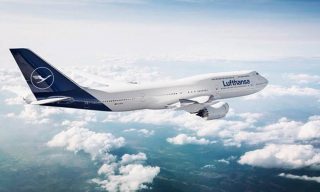 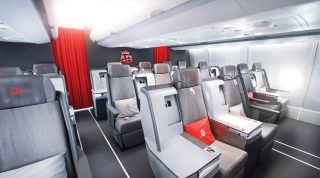 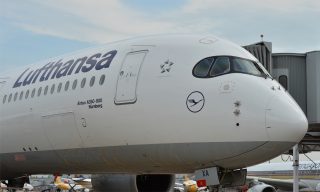 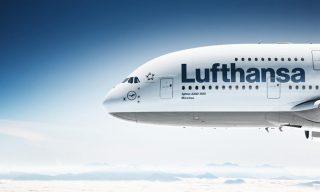 Lufthansa to Operate 6 Long-haul Routes Through May 3