In a bid to fend off its strong competitors, Australian airline Qantas brings its game several notches higher with the launch of its first Boeing Dreamliner. Qantas named the massive beauty Great Southern Land, one of the 45,000 suggestions submitted by passengers. The new plane. All photos courtesy of the airline.

With interiors designed by David Caon, the aircraft is just the first out of eight, with the rest to be delivered by the end of 2018. The company plans to christen each Dreamliner with an authentically Australian name. Interior of the aircraft

Featuring more space thanks to less seats, Great Southern Land, a 787-9, is said to have larger windows, healthier air quality, and is practically turbulence-free thanks to modern technology. The cutlery and glassware to be used aboard the plane will also be 11 percent lighter than the usual silverware used. The Dreamliners will service the Melbourne to Los Angeles route starting December and the Perth to London service starting March 2018. There’s also the possibility that they will fly from Brisbane to other cities, though Qantas has not given any details. 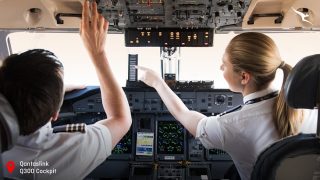 Locked-down travelers can pretend they are conducting a video call mid-flight from the passenger cab... 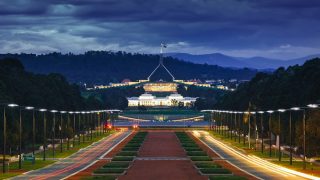 It’s the latest of 45 routes that the Qantas Group has announced or launched since the beginning o...