A Doha-based airline will make sleeping more comfortable for passengers while Joon will offer VR sets on air. Here’s our round-up of airline-related news.

Cuddling on a plane trip just became possible thanks to Qatar Airways’ new QSuites. Available in the business class section of the airline’s Boeing 777 that’s flying the London-Doha route, QSuites come with two seats that can be reclined into a flat bed. Qsuites. Photo courtesy of the airline.

Priced from US$2,100 per seat, the suites were supposed to be available on flights starting in June, but for undisclosed reasons the roll out was moved to this month. The BRIC’s amenity kit in blue. Photo courtesy of the airline.

Meanwhile, the same Middle East airline just recently announced the availability of new amenity kits from luggage brands BRIC’s and Nappa Dori. Passengers flying in the first class and business class sections of medium-haul routes can get the Nappa Dori kits, which feature images inspired by Thailand, the Netherlands, China, and Doha, among others. The kits will contain everything that a passenger needs to look fabulous, from eyeshades to lip balm, from luxe brand Castello Monte Vibiano Vecchio. The amenity kits in yellow. Photo courtesy of the airline.

Passengers on long-haul flights will get cute versions of BRIC’s Bellagio and Sintesis suitcases, which come with a hardshell and a Tuscan leather trim. Business class passengers will get lip balms, facial mists, and anti-aging moisturizers. First class bags come with socks, shades, and BRIC’s signature luggage tag—pretty much everything travelers need when journeying to new destinations. And if those announcements are not enough to impress passengers, Qatar is now offering chauffeur services for all passengers. Bookable on their official website, the service gives travelers the option to ride luxe cars such as Audi and Cadillac.

Joon to Use High-Tech VR Set

A few months back AirFrance announced the arrival of its younger and more hip sister Joon, an airline for millennials. Now, the airline has given more details about its routes and what it can offer passengers—because details were so scanty the first time they went public.

When it was first introduced, Air France was pretty clear that Joon is not a low cost carrier. But similar to LCCs, catering is paid in its economy section (whereas it’s free for business class passengers). Health buffs will be delighted, because 20% of the 60 treats that they’ll offer on air are organic—thereby upping the airline’s cool factor several notches higher. A rendering of what will be served on board. Photo courtesy of Joon.

Joon also serves as passengers’ “personal assistant” by offering services such as TravelCar, which gives passengers the option to rent out their car while they’re flying; get travel advice from Airbnb Experiences; get a tour of Paris from French concept store Le BHV Marais; and the opportunity to travel to a randomly chosen destination thanks to Waynabox.

But the pièce de résistance just might be its VR set, called the AlloSky Virtual Reality Headset. According to Gizmodo, the contraption was presented at Apex Expo in California. Available on long-haul flights for business class passengers, the gadget creates the optical illusion that images are presented on a 10-foot high definition screen. With a something as impressive as that, who wouldn’t want to fly on Joon?

Members can now earn and spend Qmiles on hotel stays and car rentals all around the globe. 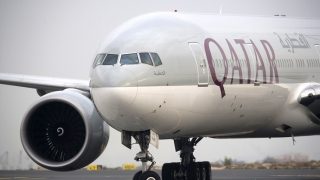 Thailand’s most popular island destination is among seven places the Gulf carrier is adding back t... 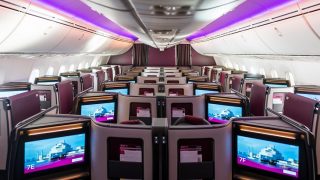