Above: Thai has taken delivery of the jet from Airbus in Toulouse.

After almost 25 years as the country’s flag carrier, Thai Airways will become the ninth airline to fly the Airbus A380 when the plane takes off on its maiden voyage on October 6.

The aircraft will be put to work first on the Bangkok/Hong Kong and Singapore routes from October 6, while a second aircraft will commute between Bangkok and Frankfurt from December. Early next year will see the introduction of A380s flying from Thai’s Bangkok base to Tokyo Narita, Paris, Osaka, Sydney, and London.

Thai’s A380 has capacity for 507 passengers split over three classes.

In Royal First Class, which seats 12 passengers, Thai Airways forwent the enclosed suite favored by Singapore Airlines in favor of semi-private suites—a decision executives say was based on consultation with Thai’s frequent fliers. Each seat in Royal First Class is 26.5 inches wide with an 83-inch pitch, and includes a 23 inch flat-screen TV. A divider separates the two central suites—allowing passengers traveling together to converse during the flight.

Royal Silk Class, the carrier’s business class, has 60 seats arranged in a 1-2-1 configuration—allowing direct aisle access for every passenger. Designed by EADS Sogerma, the company retained by Etihad for its business class, the 74-inch seat converts into a fully flat bed, while a 15-inch screen showcases the airline’s in-flight entertainment system.

Economy class fits 435 passengers in total, with 377 economy seats on the lower deck and 58 more on the upper deck behind business class. In addition to a 10-inch screen, each seat will come with an AC power outlet. 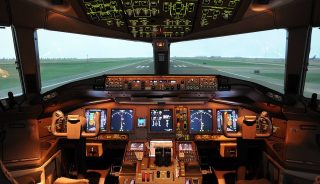 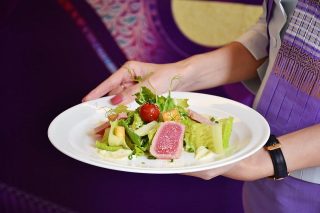 Thai Airways is Serving Its Meals on the Ground

A pop-up café at the carrier’s Bangkok headquarters recreates the experience of sky-high dining. 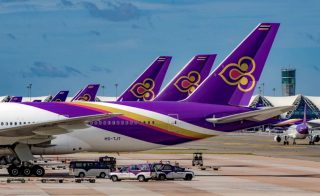