For the past decade or so, instant photography has found its own crowd. Made up of mostly younger users, these are people who prefer to decorate their space with hundreds of printouts of their European vacation.

Here, we round up the prettiest looking instant cameras that will appeal to the millennial traveler. The camera in lime green. All photos are courtesy of the brands featured.

No doubt playing to the female set, the Mini comes with a selfie mirror. Users can shoot up to 35 cm away, and it has a high-key mode that can be used to adjust brightness. User-friendly, it’s available in lime green, white, flamingo pink, cobalt, and ice blue. The camera in cobalt blue. Tech journalists were taken aback when the Sofort was first introduced in 2016. Instant photography isn’t exactly Leica’s turf. Its colorful appearance—although also available in white—is also markedly different from its other products. But the Sofort has earned tons of kudos since it was released. With a 60 mm-powerful lens, it offers several scene presets, including a selfie and double exposure mode. Although pricier than other similar products, it’s reliable and adorable, making it worth the buy. Front shot of the Murano.

Venice served as the design inspiration behind this vibrantly colored gadget. Suitable for even beginners, it has a wide-angle lens on which users can attach a number of other types. You can create light-streaked photos by holding the shutter open for several seconds. It also has blue, red, purple, and yellow filters, bringing a dash of art in your photos. The Murano from behind. 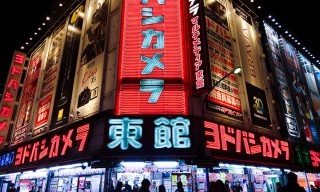