Odette
After making waves from his former 70th-floor perch at Jaan, Julien Royer has come into his own as chef-owner of Odette, the city’s most hotly anticipated restaurant opening. Named for his late grandmother, who shaped the young toque’s love for cooking, the 40-seat dining room sports a soothing palette of pastels and light gray, with a soaring ceiling festooned with food-inspired art installations. The setting is dashingly grand yet understated, and every bit as elegant as the artisanal French fare that Royer is known for. Building on his repertoire of trademark dishes, including the likes of mushroom tea with cep sabayon, the prix fixe menu also features first-rate newcomers like the grenobloise-style Japanese clam flecked with smoked bone marrow and blanketed in meunière foam. Make reservations early, as the restaurant can get booked out five weeks in advance (65/6385-0498).

National Kitchen by Violet Oon
Two and a half years after planting a flagship restaurant in the Bukit Timah suburbs, Violet Oon has spread her wings with this elegant sophomore venture at the National Gallery. While it serves popular local dishes like fish-head curry and chili crabs and iconic hawker fare such as chicken rice and rojak, National Kitchen is a Peranakan eatery at heart. You can’t go wrong with signatures like ayam buah keluak (braised chicken with Indonesian black nut) and udang goreng chilli (prawns stir-fried with a house-made spice paste of chili and garlic), but if you ever want to venture off the beaten track, try Oon’s ju hee char (mixed vegetables simmered in cuttlefish broth) and baked cod in creamy laksa (65/9834-9935).

Aura
After a string of recent openings, serial Italian restaurateur Beppe De Vito’s latest outing, Aura, emerges as his most ambitious yet. Befitting its multimillion-dollar price tag, the swanky digs with marble partitions and mirrored ceiling panels occupy a sprawling 840-square-meter space on the fifth and sixth floors of the museum’s City Hall wing (the upstairs portion is a rooftop dining area and bar called Sky Lounge). Thankfully, De Vito has kept prices affordable with a concise menu of modern Italian headlined by toothsome pastas: think caviar-flecked house-made tagliolini with grilled scampi, or trofie pasta enrobed in truffle pesto with prawns. Don’t skimp on the appetizers: the scallop crudo with frisée salad, truffle strips, and smoked quail eggs is worth the trip alone (65/6866-1977). 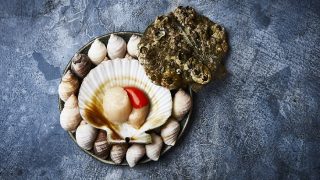 The team behind the renowned two-Michelin-starred restaurant will be in town next month for a four-w...