From Bali to the Bahamas, these underwater sculpture attractions give divers and snorkelers a chance to immerse themselves in art.

Mexico: Museo Subacuático de Arte
Fans of British artist Jason deCaires Taylor, who created the world’s first underwater sculpture park in Grenada in 2006, will want to explore his even more expansive installation at MUSA, the subaquatic “museum” that he co-founded six years ago. Spread across two sites off the coasts of Cancún’s Isla Mujeres and Punta Nizuc, it features more than 500 of his sculptural works, all cast from pH-neutral marine concrete in an effort to promote new coral growth.

Bahamas: Sir Nicholas Nuttall Coral Reef Sculpture Garden
Opened last year off the coast of New Providence, this park is now one of the Bahamas’ top dive sites, and rightly so: it’s home to Taylor’s Ocean Atlas, the biggest sculpture of its kind yet. Alongside works by Bahamian artists, the statue—more than five meters tall and weighing over 60 tons—depicts a girl kneeling under the weight of the ocean, symbolizing future generations’ environmental burden.

Italy: Christ of the Abyss
This life-size bronze statue of Christ, arms outstretched and head tilted upward, was first submerged in 1954 in honor of the pioneering Italian scuba diver Dario Gonzatti, who drowned near this spot off the Ligurian coast eight years earlier. Sunk 17 meters deep in a cove fronting the Abbey of San Fruttuoso, Il Cristo degli Abissi is also the world’s oldest underwater sculpture, though a 2004 restoration returned the barnacle-encrusted monument to much of its original state. 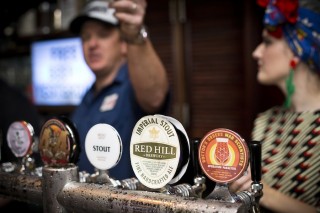