Japan may be the undisputed country of choice for viewing cherry blossoms, but these four spots are worthy contenders. A sea of pink.

The American capital greets  the arrival of spring with plenty of color and pageantry, thanks to a spectacle that started with a gift of Yoshino cherry trees from Japan in 1912. Clouds of white and pale pink petals drape the eastern bank of the Potomac River, encircling the Tidal Basin and extending to the Washington Monument. The city’s National Cherry Blossom Festival is slated to run from March 20 to April 15, ending with a street parade and the Japanese-themed Sakura Matsuri celebrations.

An hour from Shanghai by high-speed train, the lakeside city of Wuxi possesses China’s single largest planting of cherry trees, with more than 30,000 representing 67 varieties. It’s found in a 130-hectare park on the idyllic peninsula of Yantouzhu, or Turtle Head Isle, which lies on the northern shore of Lake Tai. Naturally, Yantouzhu is the setting of the Wuxi International Cherry Blossom Festival, which kicks off in mid to late March; last year’s edition included poetry recitals and a 10-kilometer night run through the park.

It might have a reputation as the “Hawaii of Korea,” but  Jeju‘s natural wonders extend beyond its white-sand beaches. The rare king cherry is native to the island, which is the first part of the country to see cherry blossoms thanks to its milder climate and southerly location. Full bloom is forecast for March 23–30, with popular viewing areas being Jeju city’s Jeonnong-ro Road and the Halla Arboretum. Jeju also holds its own seasonal festival to mark the occasion.

Seeking a uniquely Spanish cherry blossom experience? Then try the sparsely populated western region of Extremadura. Outside the walled medieval city of Plasencia, the Jerte Valley is known for its cherries, though it’s the flowers that steal the spotlight in March, when more than a million and a half cherry trees cover the slopes in a blanket of snow-white blossoms. The spectacle typically lasts 10 days from the middle of the month, coinciding with a fiesta that involves local produce, musical performances, and more. 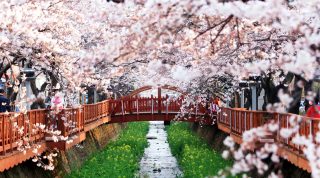 Celebrate springtime as you marvel at beautiful cherry blossom trees around the world.