From London to the Maldives, WTA tennis champion Petra Kvitova shares what life is like on her constant tournament-hop around the world.

What’s your favorite stop on the WTA circuit?
Definitely Wimbledon, for the grass courts. Grass is my favorite surface, and I have had some very special moments on those courts. I won my first Grand Slam title there in 2011, and one of the most satisfying moments of my career was when I won for the second time there this year. And the locker rooms there are the best.

The top seeds get to use the All England Club members’ locker rooms, which are really comfortable and cozy with everything you could ever need— especially super-comfy sofas for when I’m waiting for my next match. I also stay in the same house in Wimbledon Village every year, and it has made London start to feel like home.

Where would you least mind finding yourself stranded by a missed connection?
Dubai’s airport is amazing. There are so many shops, I could never get bored there. I actually took a tour of the Dubai Duty Free area this year—there are around 100 shops including my favorite, Michael Kors.

What’s always on your packing list?
I always make sure I have good music to listen to and a good book. I am reading Li Na’s autobiography at the moment, Li Na: My Life; she’s a good friend of mine, so it’s really interesting. And I bring my iPad with me for Skype calls. It helps me stay in touch with my family and friends while I’m on the road.

Are there any global brands you look for when traveling?
I love sushi, and I go to a Nobu restaurant whenever I can. They’re everywhere now, from London to Dubai to Los Angeles. Also in California, the Indian Wells Tennis Garden recently underwent a major redesign, and now there’s a Nobu there too. When I was there for the BNP Paribas Open in March, I actually got the chance to make sushi alongside the restaurant’s executive chef, Gregorio Stephenson. He taught me how to make a shrimp tempura hand roll. It’s a lot harder than it looks, but I don’t think I did too badly for my first try!

Where can you be found during your off-season?
When I want to relax and take my mind somewhere far away from tennis, I head to the beach. I visited the Maldives once and loved it—it’s so beautiful there. I was also lucky to get invited to Necker Island in the British Virgin Islands during last winter’s off-season to play in the Necker Cup. It’s a great philanthropic tennis tournament hosted by Richard Branson, but it’s more about coming together to raise money for good causes rather than playing to win. It was really fun to spend some time with the WTA girls there—Ana Ivanovic, Sorana Cirstea, and Daniela Hantuchova.

And what is the best part about returning home?
I live in a tiny town called Fulnek in the Czech Republic. There isn’t much to do there, but that’s what I love most about it—being able to enjoy my mum’s cooking, seeing all of my family and friends, and sleeping in my own bed. 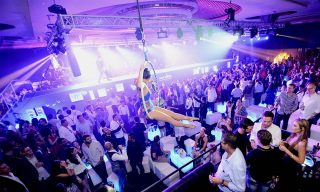