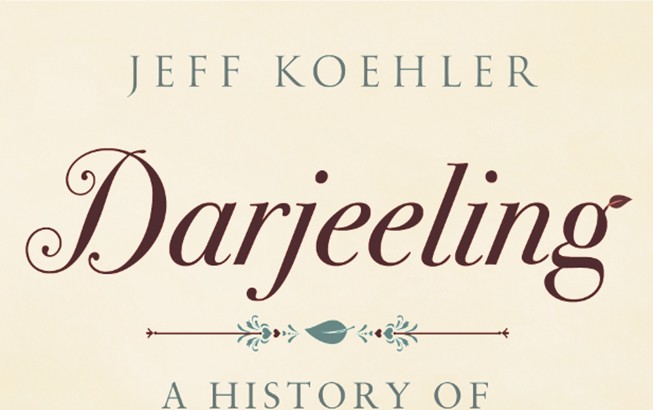 In an excerpt from his latest book, Darjeeling: A History of the World’s Greatest Tea, Barcelona-based food writer Jeff Koehler describes the first flush of the spring harvest in India’s most famous tea growing region.

Brass bells wound with garlands of orange marigolds hang from  the entrance arch for the faithful to ring as they enter the tree-filled temple complex atop Observatory Hill. Clean chimes reverberate in the quiet, chilly dawn from Darjeeling’s highest spot. Printed prayer flags in bold, solid colors—red, green, yellow, white, blue—strung on hemp ropes between poles, pillars, and tree trunks stir in the spring breeze. A troop of pale-faced monkeys, whose connection to the holiness of temples means that they are left unmolested, roam and maraud, stealing shoes that have been removed by the faithful while they kneel, pray, and light incense and small clay lamps filled with ghee (clarified butter) to one of a pantheon of gods as morning sunlight gradually slides up the surrounding slopes.

The short, early spring rains have passed, and gleamings of verdant freshness are in the Darjeeling hills. Giant ferns blanket the mountainsides. Pink magnolias and camellias bloom, the first of the pinkish-red rhododendrons. The tea bushes, stimulated by the moisture after a winter of dormancy, begin to flush new shoots so quickly that they need to be picked every four to five days. As the light filters through the darting clouds, workers pluck the young leaves: slender and lightly serrated, lacquered green in color, sprightly.

The finished tea comes out of the dryer grayish green. Steeped, it produces a pale-gold to almost-green-toned liquor that’s grassy with fresh-cut-field aromas and a floralness in its bouquet, intensely fruity in the mouth, with a hint—no more—of tartness. The season is still cool and breezy in the high hills, and that freshness carries on into the cup.

“First flush is a spring tea,” said Glenburn Tea Estate’s young manager and resident tea maker, Sanjay Sharma, in the garden’s well-lit tasting room. “The cup’s light, it’s bright, it’s fresh, it’s green, it’s brisk,” he recited in rapid-fire singsong, touching the tips of his fingers with each adjective. “It has that hint of astringency, so that lends a little crispness to the cup, it’s fresh on the palate.”

Standing at the white-tiled counter, he considered the cup he was describing. Looking more like a safari guide than a tea planter, Sanjay wore polished leather Timberland boots with white socks rolled at the calves, khaki shorts, a pressed white polo shirt, and a zipper photo vest with an inch-thick Swiss Army knife snapped into a top pocket. He had a quick grin and ready one-liners, whiskery chin-beard, and an Errol Flynn mustache that gave him a slightly caddish look only somewhat offset by his rimless glasses. His left hand, partly covered with a patchy scar from a childhood cobra bite, fingered the white tasting cup emblazoned with Glenburn’s name in elaborate Victorian cursive. “Also it’s the time when we have all the citrus plants or trees blossoming, so it’s got a very fruity kind of citrusy-ness note to it.” It has, he said, “everything synonymous with springtime.”

Darjeeling tea is “self-drinking,” meaning not only that blending it with another tea is not required—a standard practice among most of the world’s black teas—but also that it doesn’t need milk or sugar or even, because of the slight astringency, lemon. While the bold and brisk black teas from other regions in India are often prepared as sweet, milky masala chai, spiced by ginger, cardamom, and cinnamon, and slurped scalding hot from a glass held nimbly between thumb and middle finger, Darjeeling’s flavors are delicate, easily buried by such additions, and washed out by more than a few drops of milk.

First flush teas are the most delicate Darjeelings of all. Commanding top prices, they are highly anticipated by aficionados, especially in Europe, where certain boutiques and tearooms celebrate their arrival with pomp generally given over to Beaujolais wine. DARJEELING NOUVEAU announces a sign in the window of the legendary Parisian maison de thé, Mariage Frères, of the year’s first offerings. “Arrivage spécial par avion,” it says, Grands Crus and Première Récolte from a highly selective choice of gardens: Aloobari, Happy Valley, Ambootia, Namring, Castleton, North Tukvar, Nurbong, Bloomfield, Moondakotee. This is akin to listing Bordeaux’s most prestigious châteaux.

Sanjay took a sip and yielded to the tea’s gentle, composed embrace in silence. “Springtime in a teacup,” he calls it.

Tea lovers and Indophiles alike will enjoy Jeff Koehler’s Darjeeling: A History of the World’s Greatest Tea (Bloomsbury Publishing; US$27), an engaging chronicle of 150 years of tea growing in the Darjeeling hills of West Bengal.