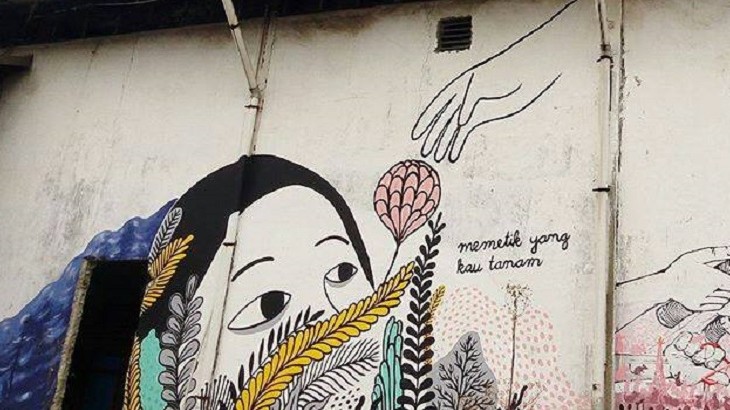 A mural with a writing translated as "reaping what you sow" on Gedung Sarinah building, where the exhibition is being held.

Jakarta Biennale, the city’s biggest contemporary art exhibition opened earlier this month, unveiling paintings, installations, and photography works from 70 international and local artists. Themed Maju Kena, Mundur Kena: Bertindak Sekarang (Neither Back Nor Forwrd: Act in the Present)—a reference to a popular Indonesian drama comedy from the early 80s and a local expression often used to describe a situation wherein one is unable to get out of a difficult situation—the two-month exhibition invites its audience to focus on the present and not indulge in the irreversible past or the future utopia. Artworks, curated by the director of the van Abbemuseum in the Netherlands, Charles Esche, along with six other emerging Indonesian curators, highlight three categories of issues, such as water, history, and gender roles. Visitors can also engage themselves in seminars, workshops, and performances throughout the exhibition, as well as an array of symposiums where artists dissect and discuss issues such as cosmopolitanism and equality. The exhibition is held at Gudang Sarinah, South Jakarta, and runs until January 14.