Culinary riches await on an island-hopping journey off the Madagascar coast.

Madagascar is known for many things —sublime sandy coastlines, dense tropical rain forests, lemurs—but not so much for its food. And that, as I discover during a week-long trip to the African island nation, is an injustice. With its history of piracy, spice trading, and colonization, Malagasy cuisine has taken on a mélange of flavors from Southeast Asia, India, and South America, tinged with the cooking traditions of the Portuguese and French. The waters here are remarkably rich with seafood, and the forests provide an abundance of vanilla, pink peppercorns, ginger root, cinnamon, and chilies. Supplement this with rice, a miscellany of tropical fruit, and the local sugarcane rum, and it all combines into one of the most intriguing cuisines in Africa.

Madagascar’s premier beach destination is Nosy Be, a Penang-size island situated off the mainland’s northwest coast. But surrounding Nosy Be is a smattering of even smaller, quieter islands. The closest is Nosy Komba, a volcanic outcrop lush with tropical rain forest and encircled by boulder-studded shores of golden sand. A sunbaked village sits on the northeast coast of the 25-square-kilometer isle, and nestled into the forested slopes are smaller settlements where families cultivate vanilla, peppers, coffee, and cacao.

I’m staying at Tsara Komba Lodge, a cluster of beautifully crafted wooden villas set amid bougainvillea-filled gardens that lead down to the beach. Time is passed here watching traditional dugout pirogues sail past in waters visited by dolphins and, from July through November, southern right whales. And what with the island’s natural bounty and the lodge’s distinct French influence, it’s no surprise that cuisine is another highlight.

Originally from southern Madagascar, chef Tina Hary worked alongside the lodge’s former French chef de cuisine before taking the helm of the kitchen, and as a result, his dishes marry Gallic technique with Malagasy recipes and local ingredients. Tina’s menu changes daily depending on what produce is available from the markets or what the fishermen bring in, which might include hand-caught lobster or crabs plucked from the mangroves on moonlit nights. He buys from farmers and foragers in the area and supplements his larder with vegetables and herbs from his own kitchen garden. The results are sumptuous dishes like ballotine of kingfish with lemongrass; wahoo carpaccio; lobster grilled in a marinade of vanilla, fresh garlic, and peppercorns; and homemade sorbets of coconut and tropical fruit.

Tsara Komba’s naturalist guide Raymond also once trained as a cook, but he now takes guests on treks to see the island’s endemic black lemurs and to visit plantations. I set out with him one day along a rain forest trail that leads up to the volcanic summit. It’s a wild hike. Stepping over tree roots and ducking beneath vines, our footsteps send snakes slithering into the undergrowth. “Of the 36,000 species of plants in Madagascar, about 82 percent are endemic,” Raymond explains as we walk. “Many of the rest came from Southeast Asia, India, and South America.”

“Mbola tsara!” he calls out in greeting as we enter a small clearing with three bamboo huts, home to a family that cultivates a plot of cacao trees nearby. Cockerels strut in the undergrowth, and cacao beans and vanilla pods are laid out to dry in the sun. This side of Nosy Komba may be dotted with small plantations, but they’re so wild looking that they blend in seamlessly with the surrounding forest.

The land is teeming with food. Bananas, jackfruit, and lemons flourish in the trees, and sprouting up from the ground are pepper, chili, and ginger plants. Vanilla also grows in abundance, and spotting clusters of the green pods hanging over the pathway ahead, Raymond makes a beeline up the steep slope to show me. “In Madagascar, people use vanilla for savory food as well as in desserts, like plantains cooked with coconut milk and vanilla,” he tells me, talking breathlessly as we continue clambering to the top of the island. We finally reach our goal and pause to soak up the view of the rain forest stretching out before us and the island-dotted ocean beyond. 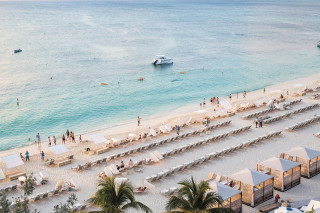