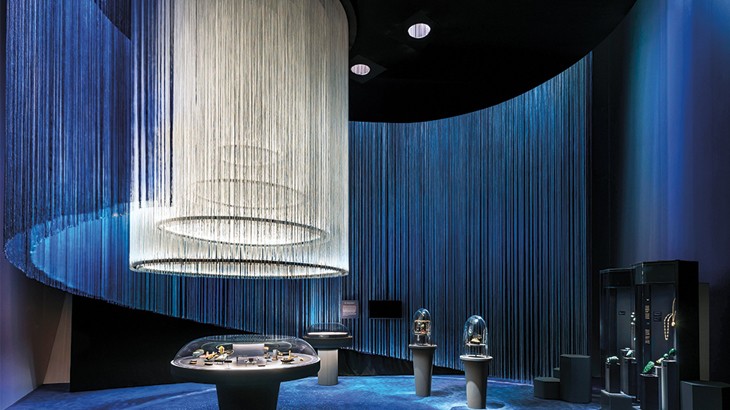 In 2011, Prince Albert II of Monaco crowned his bride with one of the most iconic jewelry pieces of modern times: the Océan Tiara by Van Cleef & Arpels. However, as Van Cleef & Arpels: The Art and Science of Gems (until August 14) at Singapore’s ArtScience Museum goes to show, the 70-carat piece dates back not five years but 4.6 billion, when the interior movements of the earth began forming the nearly 900 diamonds and 359 sapphires that now encrust the tiara. Exploring the intersection between geoscience and the art of jewelry making, the exhibition takes visitors through seven sections that each pair a design theme (couture, precious objects, icons) with a facet of mineralogy (pressure, oxygen, water), displaying 430 of Van Cleef’s dazzling creations alongside 250 minerals on loan from the French National Museum of Natural History. Pieces worn by Elizabeth Taylor and Wallis Simpson and two rose-quartz lovebirds inside a golden cage are undoubtedly man-made wonders, but equally dazzling are the natural selections, including an 800-kilogram piece of crystal, a 340-carat uncut black diamond, and what’s said to be the world’s oldest rock.

This article originally appeared in the June/July print issue of DestinAsian magazine (“All That Glitters”).