With laser lights flickering across the wash of the surf and exultant music thumping from speakers planted on the beach, an inflatable boat emerged from behind a darkened headland and puttered toward shore. When it had glided to a stop on the sand, out jumped Michel Portos, a lean, Marseille-born chef who was named toque of the year in 2012 by Gault & Millau and whose cooking earned two Michelin stars during his time at Le Saint-James in Bordeaux. A round of applause rippled around the linen-draped dinner tables as Portos made his way past a pair of beached paraw outriggers to join the squad of other chefs already at the grill stations.

Welcome to Reservations in Paradise. First held in 2013, the Shangri-La Boracay Resort & Spa’s now-annual gastronomic weekend is among the Philippines’ most anticipated culinary extravaganzas. This was perhaps especially true of its March 2019 edition, as the previous year’s event was canceled due to the impending six-month closure of Boracay for a government-planned environmental cleanup effort. Not only that, but the latest Reservations in Paradise also coincided with the resort’s 10th anniversary—a milestone marked with particular gusto by the organizers. Scallop carpaccio with squid-ink tuile, created by Galli as a starter for dinner on the second night of Reservations in Paradise.

Kicked off with sunset cocktails on the veranda of the Shangri-La’s lobby, the three-day affair then moved to a private beach where, following Portos’ aquatic arrival, five dozen attendees enjoyed a seaside dinner featuring churrasco-style grilled meats, vegetables from a fire pit dug into the sand, and some of the guest chef’s signature seafood dishes, including lobster flambéed in pastis and grilled-octopus sliders. The accompanying wines—six whites and reds from the venerable Florentine winery Marchesi Antinori—were superb as well, no surprise considering Bacchus International, a Makati-based distributor of premium wines, has been a partner in the event since its first edition. Day two’s lunch on the lawn of the resort’s Alon Garden.

The rest of the weekend unfolded just as indulgently—a garden party–style lunch buffet fueled by Bollinger Special Cuvée champagne and rosé; a six-course dinner with Paul Jaboulet Aîné wines staged on a transparent platform above the spa pool—with a final champagne breakfast at the resort’s cliff-top Sirena restaurant as a finale. Not that anyone needs an excuse to visit the Shangri-La Boracay: with its private speedboat transfers from the mainland, hot tub–equipped Tree House villas, 12 hectares of lush gardens, and two powder-sand beaches, this is one of the Philippines’ top resorts at any time of the year. But come next March, when Reservations in Paradise returns to the shores of Boracay for its ninth edition, sun-seeking gourmands will definitely want to be there to take (and drink) it all in.

This article originally appeared in the June/July 2019 print issue of DestinAsian magazine (“Boracay For Epicures”). 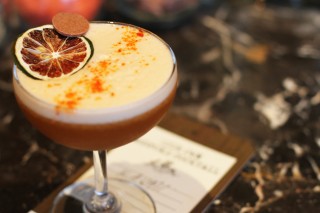 Central Manila brims with upmarket bars and novel restaurant concepts—if you know where to look. 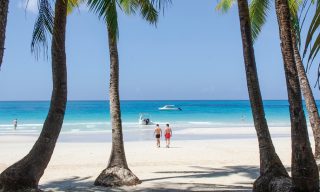 Boracay Reborn: A Look at the Newly Reopened Philippine Island

Following its six-month closure for a major cleanup and sweeping infrastructure upgrades, the Philip...