This highland destination in West Java province has remained off the radar of international travelers in spite of its natural beauty. 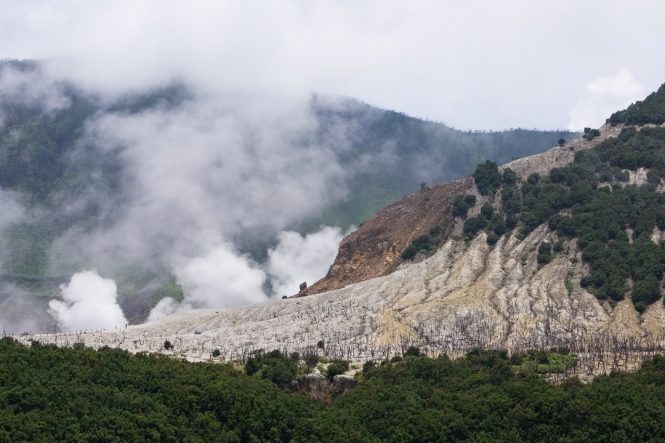 Plumes of steam rising from the crater of Mount Papandayan. (All photos: James Louie)

Weekenders escaping the sweltering Indonesian capital tend to gravitate toward the tea plantation–lined mountain pass of Puncak and increasingly congested Bandung, but those with a bit more time on their hands will be amply rewarded by going a little farther into the West Java countryside. Ringed by mountains in the eastern part of the Priangan highlands, and just under four hours’ drive from Jakarta, Garut is an ideal place to explore traditional Sundanese food and culture in between mountain hikes.

Head for the Hills

Avid trekkers looking for a bit of a challenge will want to climb the steep-sided volcanoes of Guntur and Cikuray, while popular Mount Papandayan is suitable for those of all skill levels. Hikers at the latter do not have to contend with a great deal of elevation gain as the parking lot is already a cool 2,000 meters above sea level; come on a weekday and you’ll likely have the hiking trails almost entirely to yourself. Beyond the rocky crater, where steaming fumaroles emit a sulfurous scent, the main draw is hutan mati, the surreal remains of an elfin forest whose trees were killed by a catastrophic eruption in 1772. But arguably more memorable are the nearby meadows festooned with wild-growing bushes of critically endangered Javanese edelweiss (Anaphalis javanica). Time your visit between April and September, when their tiny but sweet-smelling flowers are typically in bloom. 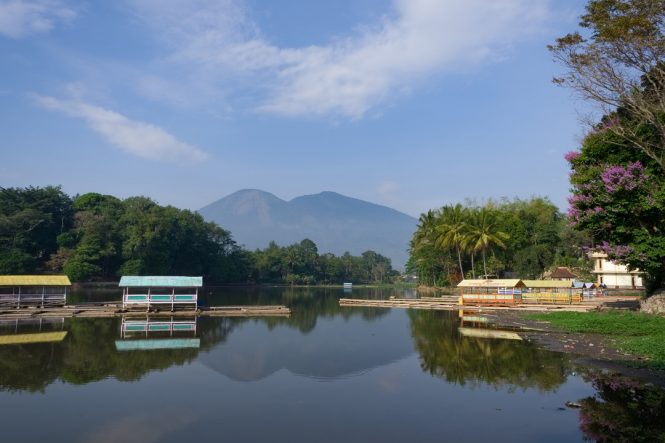 Situ Cangkuang, the small lake one must cross to reach Cangkuang Temple.

Heritage buffs will not want to miss Cangkuang Temple, a small sanctuary discovered in 1966 that was carefully reconstructed (using as much of the original stones as possible) over the next decade. Its significance as one of the few ancient Hindu or Buddhist monuments found in West Java is detailed in an adjacent one-room museum housing artifacts found in the immediate surroundings, as well as photos chronicling early excavation work at the site and the ruin’s subsequent restoration. The sparsely decorated temple houses a weathered statue of Hindu god Shiva, which, like the structure itself, is believed to date to the eighth century. Getting there is half the fun: visitors are rowed across a small lake in a bamboo raft to reach the wooded “island” where it stands. It Takes a Village

Though officially in neighboring Tasikmalaya regency, the traditional Sundanese village of Kampung Naga is easier to reach from Garut. Set amid a patchwork of paddy fields and forested slopes laced with small waterfalls, the 112 thatched-roof dwellings step down in rows to the Ciwulan River. Residents still live the way people have done for centuries, depending on mountain springs for their supply of water, and with their daily habits dictated by customary law. Hiring a village guide is required; you might even be taken inside a traditional house, where local traditions will be explained over hot tea and homemade snacks. The scenic drive to Kampung Naga through the emerald-green Ciwulan Valley should be taken sooner rather than later, as the Indonesian government plans to carve a four-lane highway through the area. 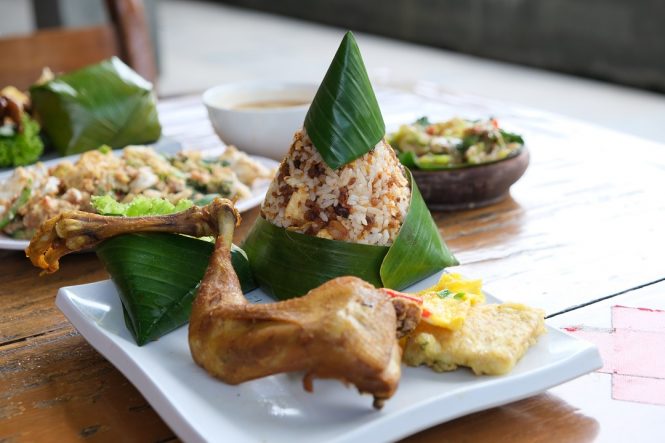 In the Cipanas area on Garut’s northern outskirts, three breezy restaurants sit side-by-side along Jalan Otista, the main road running into town. As its name suggests, Rumah Makan Khas Sunda Cibiuk serves up local specialty sambal Cibiuk. This glorious combination of chilies, tart green tomatoes, lemon basil, sand ginger, and roasted shrimp paste is an addictive condiment that pairs well with fresh vegetables and dishes like nasi tutug oncom (rice mixed with fermented soybeans). Next door, Rumah Makan Asep Stroberi and Saung Bambu Racik Desa have similar menus but without the sambal cibiuk; go for the grilled gourami fish and Sundanese-style nasi liwet (rice cooked in coconut milk with lemongrass and other herbs). Another must-try? The peanut sauce–drenched salad karedok, which features raw vegetables such as leunca (black nightshade), a pea-sized relative of the eggplant with a slightly bitter taste. Patrons at Racik Desa can dine in modernized saung, or open-air pavilions dotting the rice paddies on site (a minimum charge applies). 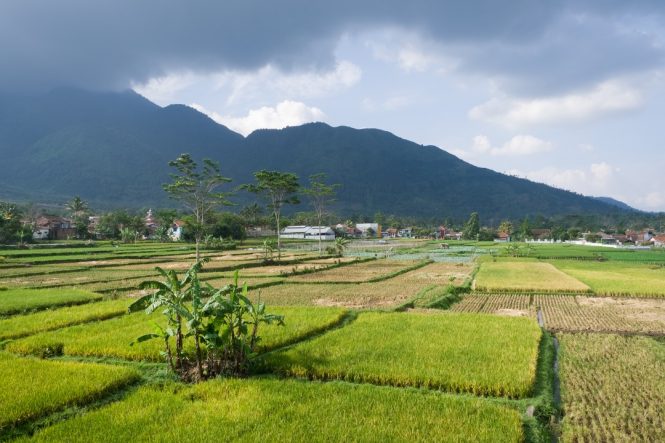 Paddy fields on the doorstep of Hotel Santika Garut.

Rooms with a View

A number of resort-style lodgings are clustered in and around Cipanas, where a recommended option is the four-star Hotel Santika Garut (doubles from US$117). Most of the accommodations have balconies, but booking a mountain view room means you’ll wake up to a soothing patchwork of paddy fields tended by local farmers, some of whom bring flocks of ducks to graze here each morning. Downstairs, an outdoor pool and terrace occupy the hotel’s central courtyard, while the Arundina restaurant serves a decent breakfast spread. Expect eggs, doughy pastries, and fresh tropical fruit, as well as Indonesian-leaning fare like bubur ayam (chicken congee), freshly made bakwan (vegetable fritters), and cheesy macaroni schotel — just the thing to fuel up for a hike at Papandayan or a day’s worth of sightseeing.