Making history as the first Airbus A380 to land in Portugal, the superjumbo’s livery looks set to promote marine conservation. For the first time in history, an Airbus A380, the biggest commercial aircraft in the world, has landed in Portugal.

Aircraft wet lease specialist and charter airline Hi Fly has unveiled its first Airbus A380 superjumbo, which bears a special coral reef livery, in support of the “Save the Coral Reefs” campaign.

One side of the plane is painted in dark blue displaying destroyed corals, in contrast to the other side, which shows a light blue and pristine ocean with colorful and healthy marine life. Paulo Mirpuri, president and CEO of Hi Fly, and president of the Mirpuri Foundation, said of the livery: “A big cause requires a big answer and now, the biggest commercial aircraft on the planet will be the one carrying this big message around the globe.”

The group also added that “With 50 percent of the world’s corals already gone, action needs to be taken immediately and awareness is the first step. If no action is taken, these beautiful ecosystems will disappear by 2050.” The Portugal-based carrier has acquired two second-hand A380 superjumbos which will be returned to Singapore Airlines following the end of their lease period. Each one is configured with 471 seats. Apart from being the first wet lease airline to fly the aircraft, Hi Fly is also the 14th operator of the A380 and the fourth in Europe, along with British Airways, Lufthansa, and Air France. 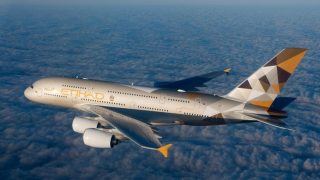 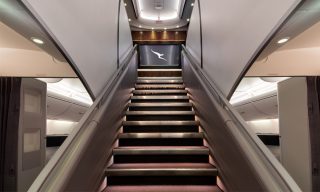 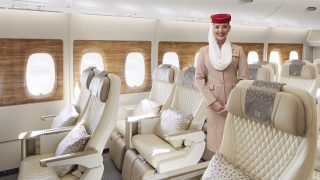 The leading Gulf carrier has unveiled a premium economy cabin and other enhancements aboard a brand-...

To protect the oceans, the Portuguese carrier has pledged to eliminate the use of single-use plastic...