Seventeen years after photographer Frédéric Lagrange first visited this remote, sparsely populated land of steppe and desert, his debut photo book, Mongolia, captures the elemental beauty of the country and its people. Bactrian camels grazing in the vicinity of the same lake.

Undulating grasslands, majestic mountains, boundless blue skies, an overwhelmingly friendly population of nomadic steppe-dwelling herders—it’s little wonder New York–based photographer Frédéric Lagrange became smitten with Mongolia, a vast, landlocked nation that he has visited more than a dozen times over the last 17 years. He first heard of the country from his paternal grandfather Louis, a former French soldier who had been interned at a POW camp in Germany during World War II. A young herder in his ger near Khövsgöl Lake, northern Mongolia.

As a child in Versailles, Frédéric was captivated to hear of Louis’ release in 1944 by a detachment of Mongol troopers under Soviet command—fierce, otherworldly men who swept into camp and scattered the German soldiers before them. “That left an indelible picture in my mind of Mongolia and its people,” he writes in the introduction to his long-overdue first book of photography, Mongolia, which has just been released by Bologna-based publisher Damiani. “After all, I owe my grandfather’s life to them—and, in turn, my own.” Portrait of a ranger in the Üüreg Lake area of western Mongolia, his face weathered by a lifetime spent mostly outdoors on horseback (and by a love of arkhi, the local vodka).

Frédéric was in his early thirties by the time he finally made it to Mongolia, having saved enough money from his job as a photo
assistant in New York to fly to Beijing and then make his way by rail to Ulaanbaatar. The year was 2001—little more than a decade since the former Soviet republic had regained its autonomy. Men resting on the frozen surface of Khövsgöl Lake.

He stayed for four weeks and traveled as far as Üüreg Nuur, a saline lake in the Altai Mountains of western Mongolia. There, he befriended a family of nomads at a seasonal encampment, joining them on their marmot hunts and helping to keep their herd of cattle safe from marauding wolves. It was the beginning not only of his lifelong love affair with the country, but also of his career as a photographer in his own right. A herder at Tolbo Lake.

Since then, Frédéric’s work has featured regularly in some of the world’s most prestigious magazines (including, humbly, this one). More to the point, he has revisited Mongolia 13 more times on month-long excursions that took in all four seasons and every corner of this immense and enigmatic land. Travel was by car, by old Russian-built Tupolev planes, by horseback, and by camel. A family assembling their own tent at a summer camp in the province of Bayankhongor.

Conditions were often tough; Frédéric recalls blizzards, sandstorms, subzero temperatures that would cause his Pentax 6×7 camera to jam, and a dangerous crack in an iced-over lake he was traversing. But he also encountered “some of the warmest and most hospitable people I’ve met,” and every camp and village he visited put him up in the spare ger, or tent, they kept for travelers. A bird framed in the smoke hole of a ger—the traditional Mongolian tent— being assembled in the village of Sagil, near the Russian border.

“My greatest asset throughout this long-term project were Mongolian guides like my dear friend Enkhdul Jumdaan. They helped me understand local systems, traditions, and eccentricities,” he tells DestinAsian. “I also learned early on to adapt myself to the Mongolian rhythm. A horse on the shores of Üüreg Lake.

The people could be quite unpredictable and sometimes downright frustrating, so I did minimal planning. But I always made a point of participating in the local customs, which is crucial to establishing trust. Whenever I arrived at a camp, I’d be offered suutei tsai—a salty tea made with cow’s milk—and homemade cheese or meats. In return, I would offer sugar and salt or cigarettes and candy, paper, and pens for the children. I always made sure to have a gift of some sort.” A marmot hunter in the Üüreg Lake area returning home with his catch.

Mongolia is the culmination of these experiences—a 252-page large-format book filled with images that portray the country with a vividness rarely seen before. Shot entirely on negative film, the pictures convey luminous landscapes as varied as desert, steppe, and taiga forest, offset by intimate portraiture that captures the smallest details, from the fissured wrinkles on the face of a local ranger to the flushed cheeks of a swaddled baby. A Soviet-era theater in the town of Choir, which lies along the Trans-Mongolian Railway some 250 kilometers to the southeast of Ulaanbaatar.

As the award-winning essayist and travel writer Pico Iyer says in his forward to the book, “Frédéric knows every inch of the land, it seems, but, more important, he knows its people inside-out. He has learned to see things with their eyes, and felt them with his heart … I look at the weathered, indomitable faces in Frédéric’s vision—the exalting landscapes—and I’m reminded not only of a trip that lodged inside my memory, as few journeys do, but of a world that I knew in some part of myself before I ever set foot in Mongolia.”

This article originally appeared in the October/November 2018 print issue of DestinAsian magazine (“Mongolia”). 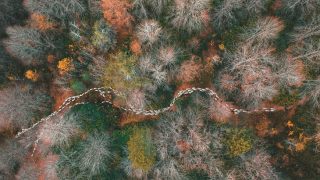 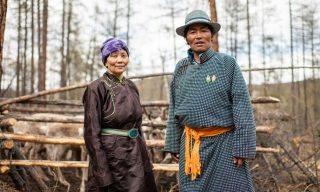 The home-sharing service has partnered with geotagging startup what3words to offer stays with a rein... 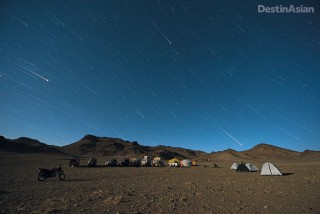 An off-road adventure through the wilds of Mongolia provides an exhilarating connection to the land,...