From game drives in Pilanesberg National Park to a river safari on the upper Zambezi, a sun-drenched sojourn in southern Africa delivers creatures—and creature comforts—aplenty.

Did something just bite my toe?

With the Zambezi River rushing around me as I clung to the slippery rocks at the edge of Victoria Falls, I was so focused on not losing my grip that the nibble barely registered. But there it was again—something was definitely nipping at my feet. As coolly as I could manage, I shouted over the roar of the water to my guide—a dreadlocked, neoprene-clad Zambian with the unlikely name of Alpha Omega—“Is there something in here with us?”

“Ah, it is just baby fishes,” he said, wiping spray from his eyes. “They give your feet a massage, yes?”

At least they’re not baby crocodiles, I thought as I extricated myself from the rock pool and clambered back to Livingstone Island. Perched above the falls in the middle of the Zambezi, this jungly wedge of basalt is named, as one might presume, for the great Scottish explorer David Livingstone, who stopped here in 1855 during his three-year trek across subequatorial Africa. Today it serves as the staging area for small groups of tourists (only 16 guests are allowed on the island at a time) to partake in what could be Zambia’s most hair-raising seasonal activity: a swim in one of two naturally formed pools at the edge of the world’s largest waterfall. The more famous of the two, the so-called Devil’s Pool, was off-limits during my February visit as the rain-swollen Zambezi was already running too high, but the Angel’s Pool was still open, so I gamely joined Alpha Omega and a pair of strapping young men from Lusaka for a dip. Admittedly, no one has ever died doing this—or so I was reassured—but when all that separates you from a 100-meter cataract is a submerged lip of rock, knowing that doesn’t make the experience any less terrifying. I lasted five minutes before retreating to dry land to towel off. The Zambians stuck it out longer, howling like kids at a water park as the river churned around their glistening torsos before plummeting into the abyss.

Victoria Falls was just one highlight of a nine-day trip to southern Africa. It was my first visit to the continent, and I had elected to keep to what Sun International—the hotel and casino group founded by Johannesburg-born hospitality magnate Sol Kerzner—calls its “golden triangle” of signature properties: the Palace of the Lost City in South Africa’s North West Province, the Table Bay Hotel in Cape Town, and the Royal Livingstone in Zambia.

I began at the Palace, the grandiose showpiece of the Sun City entertainment complex that Kerzner opened in 1979 deep in the bushveld of what was then the Bophuthatswana homeland. For those of you who remember Steven Van Zandt’s anti-apartheid lyrics “I, I, I, I, I, I ain’t gonna play Sun City,” that’s the place, a onetime symbol of racial inequity that became a much more palatable sort of playground after the country’s transition to democracy in 1994. Just watch the Adam Sandler flick Blended—filmed here in 2013—to see what fun awaits today. A two-hour drive from Johannesburg through scrubby grassland fringed by low granite hills, the complex still draws punters for its casino, but the emphasis these days is on more innocent pursuits. Apart from two Gary Player–designed golf courses and a lake where you can go jet skiing, there’s a water park with an artificial beach and an enormous swimming pool that generates two-meter-high waves every 90 seconds; a zip-line course that bills itself as the world’s longest and fastest; a crocodile sanctuary; and a maze of stone passageways that leads to a beer garden showcasing with local microbrews. And rising above it all are the domed towers of the Palace, a fantasyland of wildlife sculptures and frescoed ceilings and ornate colonnades designed to evoke the lost city of a mythical African kingdom. It’s all so over-the-top as to be actually transporting. 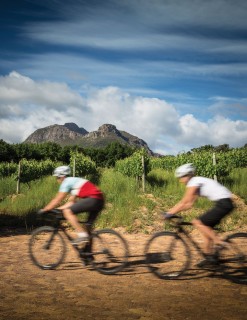