A weeklong train journey from León to Galicia provides a tantalizing introduction to the sights, sounds, and flavors of Spain’s lush north. Ferrocarriles de vía estrecha—Is it just me, or does everything sound better in Spanish? “Narrow-gauge railways” doesn’t have nearly the same ring to it. Call them what you will, northern Spain has a network of these historic tracks, their rails spaced just a meter apart due to the mountainous terrain. One of the region’s oldest lines, La Robla, is also the longest stretch of narrow-gauge railway in Western Europe; it was built in the late 19th century to transport coal from León and Palencia to the blast furnaces of Bilbao. These days, though, instead of freight, the route carries tourists. Or should I say turistas? Yep, that sounds better too. I had joined El Transcantábrico Clásico at León as the train embarked on its seven-night journey to the pilgrimage town of Santiago de Compostela. Now, three days later, we were rolling through the dewy Cantabrian countryside toward Cabezón de la Sal, all of us feeling very well fed if not a little overwhelmed by the jam-packed itinerary. Our route would cover almost 1,000 kilometers and pass through five of Spain’s 17 autonomous communities: Castile and León, Basque Country, Cantabria, Asturias, and Galicia. There was a lot to take in, mostly on excursions with the private coach bus that shadowed the train from station to station. So far, we had poked around a plethora of medieval churches and cathedrals and monasteries, and whistle-stopped our way through old-town Bilbao and the Belle Époque elegance of El Sardinero in Santander. Next up were the prehistoric cave paintings at Altamira, discovered in 1879 by the nine-year-old daughter of an amateur archeologist named Marcelino de Sautuola. The quality and condition of the images—mostly bison, boar, and other animals rendered vividly in red and brown ocher—was so good that when Sautuola published his findings he was accused of forgery; only after his death did the scientific community confirm that the paintings were indeed of Paleolithic origin. Perhaps ironically, the cave we visited was itself a forgery—or rather, an exact replica, built alongside a museum in 2002 after the nearby original was closed to protect it from damage by mass tourism. (Then, as now, Altamira is the second-most visited site in northern Spain, after the Guggenheim Bilbao.) Given the venerable age of most of my fellow passengers, that was just as well; at least our grotto came with even walkways, air conditioning, and benches from which to admire the ancient art on the low ceiling of the inner chamber.

El Transcantábrico Clásico crossing the River Ebro at Arija in Castile and León, one of the five autonomous communities that the train passes through on its journeys between León and Santiago de Compostela.

Billing itself as the oldest tourist train in Spain, El Transcantábrico Clásico first hit the rails in 1983. I imagine that’s when most of the guests onboard were hitting middle age. “Looks like a scene from the movie Cocoon,” quipped a Chilean retiree as he and his wife joined the group in León. There were 45 of us, mostly older Spaniards. Few spoke English, so those of us who did—one couple from Australia, two more from Germany and the Netherlands, and me, the lone Canadian singleton—quickly established an allegiance.

We had sat together for the first of many communal meals at a traditional Castilian restaurant on the main plaza of Villalcázar de Sirga, where an innkeeper with a brown cloak and staff welcomed us like pilgrims into a medieval banquet hall to lunch on rib-sticking albada soup, pickled pork loin, and juicy cuts of wood oven–roasted baby lamb (lechazo asado). Generously doused with an aromatic rosé from nearby Ribera del Duero, we all agreed then that food was shaping up to be the highlight of the trip.
Off the train, most of our lunches unfolded in the local parador—state-run inns that are usually housed in atmospheric old buildings. In Santillana del Mar, a thickly touristed if undeniably charming Cantabrian village of cobbled streets and grand Renaissance houses, we ate at an 18th-century mansion; two days later in seaside Gijón, our parador inhabited an old watermill. And twice we supped at Michelin-starred restaurants—at Santander’s El Serbal, and the next night at El Corral del Indianu in Arriondas, where chef José Antonio Campoviejo jazzes up Asturian fare in dishes like squid-ink rice with roasted-garlic mayo. Meals onboard were no less memorable. Served by white-jacketed waiters during the train’s station stops, the four-course affairs showcased cuisines from the regions we were passing through. One evening it was codfish in vizcaina sauce, a Basque classic; another night it was a fabulous rendition of fabada, an Asturian bean stew simmered with sausage and slabs of pork fat. For our final dinner, we were presented with an embarrassment of Galician seafood—velvet crab, lobster, razor clams, gooseneck barnacles—straight from the markets in Viveiro. Eroded rock formations are the main attraction at Las Catedrales Beach in Galicia.

With Viveiro still two days down the track, we climbed back on the bus at Arriondas and drove into the foothills of Picos de Europa National Park. One drawback to this kind of travel, of course, is that you are a slave to the itinerary; there would be no stopping at the beguiling Roman bridge that arches over the Stella River, just as there had been no time to give the Guggenheim museum in Bilbao little more than a cursory inspection. But you do get an effortless introduction to a great swath of España Verde (Green Spain), as the county’s lush north is known. And, amid the jagged limestone peaks of the Picos, you’ll appreciate having an experienced driver behind the wheel to negotiate all the hairpin bends. These led up, up, up to a wind-swept pasture bordered by a small glacial lake, where we stopped at a cozy stone farmhouse turned café to nosh on cider-cooked chorizo sausages, crumbly cave-aged cabrales cheese, and glasses of cloudy apple cider poured the Asturian way, with the bottle held high.

Back down the road is Covadonga, the site of an eighth-century battle against the Moors that is commemorated as the first victory in the Reconquista of the Iberian Peninsula. A fairy-tale basilica stands on the plateau now, its pink-hued stone and pointed towers dwarfed by the surrounding hills. We were given an hour to explore the site on our own, though most of us ended up in the same queue to see the holy cave where an image of the Virgin Mary is venerated above a gushing waterfall. Lunchtime in one of El Transcantábrico’s dining cars.

The next day, after touring Avilés (home to the Centro Niemeyer, one of the last great projects by the celebrated Brazilian architect Oscar Niemeyer) and the breezy promenades of Gijón, our blue-and-white-liveried train rolled across the Asturian coast to the harbor town of Luarca. The passing scenery—green farmland, red-roofed villages, blue coves and inlets—kept me glued to the window of the salon car. I wasn’t alone. The cabins on El Transcantábrico Clásico may feature hydro-showers and burnished wood paneling, but fixed double beds means there’s not much room to move around in by day.

We crossed into Galicia while breakfast was being served the following morning. It didn’t take long to spot evidence of Galicians’ Celtic heritage: a bagpiper busked to crowds on the fine white sand of Las Catedrales Beach; in Ribadeo, we strolled past shops stocked with local tartan and spotted a group of men off the town’s palm-studded central plaza playing a lawn bowling game called birlos, similar to Irish skittles. A prehistoric bison painting at Altamira.

After our seafood feast that night in Viveiro, I didn’t stick around long enough in the dining car to find out who would win the “nicest passenger” contest. But I did feel a twinge of camaraderie the next morning when we stepped off the train together for the last time. This was at the station in Ferrol, the birthplace of Franco, where we waved goodbye to the crew and climbed aboard the bus for Santiago de Compostela.

The end point of our trip was also the terminus of the Camino de Santiago, a centuries-old pilgrimage route through northern Spain. We had seen some pilgrims on day five outside the cathedral in Oviedo, the Asturian capital; with their walking sticks and scallop shells (the symbol of St. James), they’re not difficult enough to spot. But Santiago de Compostela was bursting with them. That our bus driver managed to drop us off in the main plaza without running anyone over was nothing short of a miracle.
At the grand parador overlooking the square, we went our separate ways. An onboard appetizer of Cantabrian tuna with endive and diced apple.

Some headed to the train station, some to the airport, others into the fray of Santiago’s cobbled streets. With a few hours to kill before my flight back to Madrid, I pressed past beggars and bagpipers and backpackers to the town’s cathedral, a baroque beauty said to house the bones of St. James. This is where the Camino de Santiago officially ends. From a pew in the soaring nave, I watched as pilgrims and other worshippers took turns behind the altar hugging an effigy of the apostle. They were jubilant. And so, in my own way, was I—grateful for what I had seen over the past week, but also knowing that I would return one day to retrace parts of El Transcantábrico’s route at my own pace.

Getting There
Operated by a division of Renfe, Spain’s state-owned railway company, El Transcantábrico Clásico travels across northern Spain from May to October. The full seven-night itinerary between León and Santiago de Compostela is priced at about US$4,190 per person. Four- and three-night trips are also offered on sections of the route.

This article originally appeared in the April/May 2019 print issue of DestinAsian magazine (“On The Straight And The Narrow”). 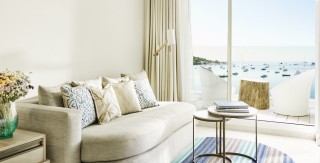 Nobu Hotel to Open in Ibiza

Nobu Hotel brings a new dimension to Ibiza's hotel landscape, providing wellness and the most luxuri... 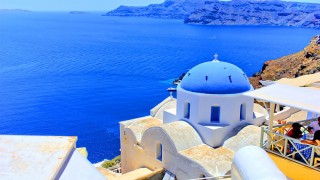 Find out about our top 10 picks of the best European summer getaways.

A new itinerary allows guests to travel in style between Jakarta and Amanjiwo, the brand’s acclaim...