Vaccine rollouts and pent-up demand for travel are being cited as reasons to be optimistic about the aviation sector’s recovery. 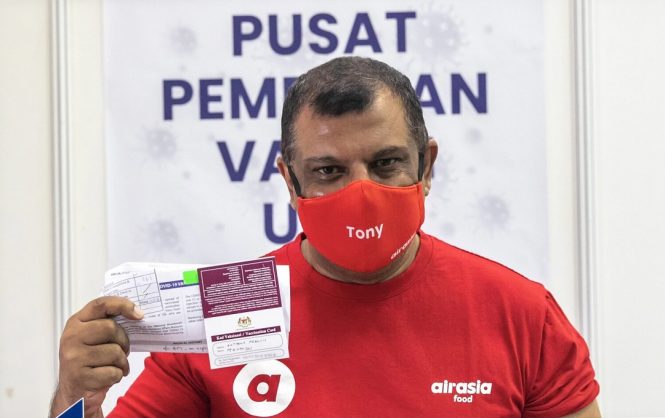 Despite setbacks such as the emergence of more infectious coronavirus variants, AirAsia Group CEO Tony Fernandes believes this year will see a strong comeback for AirAsia and other airlines around the world. In a statement published after receiving his first dose of a Covid-19 vaccine, he said ongoing inoculation programs, combined with strong demand for air travel, would fuel a V-shaped recovery in the coming months. The company chief cited IATA’s projections that domestic air travel in 2022 would surpass 2019 levels, with the Asia-Pacific region leading the way.

Fernandes said AirAsia staff members in the airline’s key markets have either already been vaccinated or are registering to get theirs as soon as possible. “Importantly, in all of the major markets we operate in, vaccination rollouts are on track to have the majority of the population vaccinated towards the end of the year which is a great sign of things to come for the AirAsia Group.”

The chief also explained that the AirAsia Group was using this period to reduce its cost structure, leaving loss-making ventures like AirAsia Japan while doubling down on its commitment to the ASEAN market. AirAsia has also been optimizing its route network and fleet strategy, with an eye to resuming flights on the most popular and profitable routes when travel restrictions are lifted.

Fernandes added that the grounding of 245 AirAsia planes during the crisis gave the company an opportunity to diversify and fast-track its digital businesses that were launched well before the pandemic hit. Pointing out the range of travel, lifestyle, and fintech products already available on the AirAsia super app, he said that e-commerce and logistics were “the way forward.” The AirAsia Group CEO then made the claim that these digital businesses were already turning a profit, and predicted they would overtake airline revenues in the next few years.

As for the airline itself, Fernandes had this to say: “I’m confident AirAsia will recover faster than many of our competitors, as more than 50 percent of our business is domestic leisure, which is going to pick up before regional or business travel. Low-cost domestic short-haul will likely rebound by the third quarter of 2021, and international could reach pre-Covid-19 levels by end of 2022. With the increased introduction and adoption of a digital travel passport and vaccine passport, travel will also be made easier and safer amid the current situation.”