The low-cost carrier is catering to a thirst for domestic travel by ramping up connectivity in both countries. 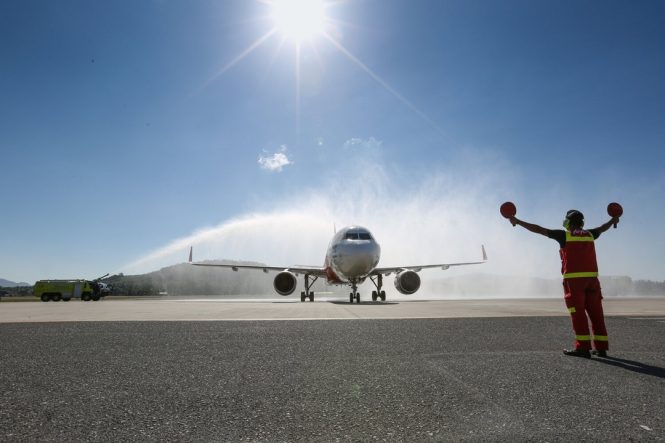 In Langkawi, the first AirAsia flight from Kota Bharu was greeted with a water salute. (Photo: AirAsia)

Those in Peninsular Malaysia looking to travel this festive season can take advantage of several new routes launched by AirAsia. Today marked the debut of regular passenger services between Penang and Kota Bharu as well as Johor Bahru and Kota Bharu. Both routes will be flown every Tuesday, Thursday, and Saturday, with the flight time to Kota Bharu lasting one hour from Penang and one hour and 15 minutes from Johor Bahru.

Thrice-weekly services from Kota Bharu to Langkawi (with flyers spending an hour and five minutes in the air) were introduced over the weekend; the maiden flight had a healthy passenger load of 80 percent. December 23 will see the launch of a thrice-weekly service between Ipoh and Langkawi, just in time for the year-end holiday season. Scheduled to take 55 minutes each way, these flights will be operated on Wednesdays, Fridays, and Sundays aboard an Airbus A320.

AirAsia’s Chief Commercial Officer Amanda Woo said in a statement, “The recovery of domestic tourism will be a collective effort from everyone in the industry, and AirAsia is committed towards it from both the perspective of increasing the connectivity of [our] domestic network coupled with low fares, as well as continued stringent health and hygiene procedures for everyone to travel confidently.”

For Malaysia-based travelers, the budget carrier is now offering fares from as low as RM 21 one-way on both new and existing domestic routes for travel through June 2021. The special prices will be available until January 3, 2021 for flight bookings made via airasia.com and the AirAsia app. In addition, all tickets bought up to December 31, 2020 for travel through March 2021 are eligible for unlimited date changes at no extra cost via My Bookings.

Over in Indonesia, the local subsidiary of AirAsia has launched five new domestic routes this month, with four of those flown from its hub at Jakarta’s Soekarno-Hatta International Airport. Ten-times-weekly services to Padang and Pekanbaru began earlier this month (both last one hour and 45 minutes), while one-hour, five-minute flights to Palembang operate 11 times a week. Similarly, passengers traveling from Jakarta to Pontianak can now make the 90-minute hop across the Java Sea on a twice-daily basis. AirAsia Indonesia is also running new flights between Bandung’s city-center Husein Sastranegara International Airport and Bali three times a week, with an Airbus A320 making the one-hour, 45-minute journey on Wednesdays, Fridays, and Sundays.