First unveiled in 2016, United’s Polaris premium concept encompasses the carrier’s lounges and inflight business-class product. Recently, the carrier has unveiled its redesigned Polaris Lounge at Newark Liberty International airport, which offers 15 different types of seating across a total of 455 seats. The 2,517-square-meter lounge features four private phone rooms, ten private daybed suites that come with adjustable lighting, ten shower suites, a bistro buffet and bar, as well as a private dining area with table service. A press release on the new lounge says: “When visitors first enter, they will be greeted with a vibrant lighting fixture created by Brooklyn-based art and design laboratory Richard Clarkson Studio that is meant to mimic the constellations of the 12 zodiac signs”. A look at the interiors of Gulf Air B787

Gulf Air’s new B787 Dreamliner will have newly designed economy and business-class seats that coincide with a revamped “smart with heart” brand identity created by brand consultants Saffron. Features of the aircraft’s redesigned Rockwell Collins business-class seat include private zones thanks to raised privacy panels in the suites, and rice-brown leathers used on the seat headrests, arm caps, and footstool. 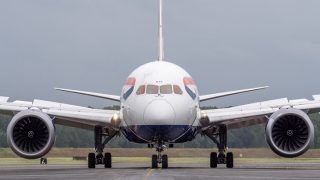