Even though the cinematic series of Harry Potter concluded in 2011, fans of the world of wizardry still have something to squeal about with the expansion of the Warner Bros. Studio Tour London−The Making of Harry Potter. Having opened in 2012, the Studio Tour gives visitors behind-the-scenes secrets and up-close encounters with the movies’ authentic sets, which now include the highly-anticipated original Hogwarts Express steam engine housed within a recreation of the magical Platform 9 3/4.

A frenzy of photo-sessions are sure to ensue as visitors are able to walk along the train’s adjoining carriages and sit in the one that was used during filming. Visitors can also rummage through a set of prop luggage on display revealing different items owned by the franchise’s beloved characters. After explorations are through, visitors can take home a piece of the magic from the train-themed souvenir shop, stocking sweets inspired by the Harry Potter films and specifically Hogwarts Express. 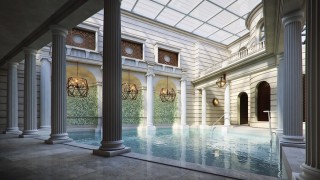 The Gainsborough Bath Spa Set to Open in July

The luxurious new spa hotel will be the first hotel in the U.K. with access to thermal waters.