Boarding a plane is exciting enough, but All Nippon Airways (ANA) looks set to elevate the flight experience to new heights with its new Airbus A380 aircraft.

The aircraft, the first of three that the Japanese carrier has on order, will debut in spring 2019 on its Tokyo-Honolulu service.

Passengers can expect to soak in the spirit of Hawaii thanks to cabin interiors that light up with special colors to reflect the US state’s enviable blue skies, sunrises, sunsets, night skies, and rainbows.

The aircraft’s Flying Honu turtle-themed livery is equally photogenic, with a total of three colors: blue, teal, and orange — a result of an open competition by ANA to allow the public to submit ideas for the new aircraft’s design. The double-decker aircraft will feature a first-class cabin with eight seats on the upper deck, laid out in a 1-2-1 configuration. Separated from the business-class section, these first-class seats will each have personal doors, as well as a 32-inch screen, a wide table, extra reading lights, and a personal linen closet. Behind the first-class cabin, the business-class section offers 56 fully-flat seats staggered in a 1-2-1 format, with “paired” seats in the center of each row that’s perfect for couples. Aside from aisle access, all seats also come with an 18-inch monitor screen, a wide table, and side table. Situated at the back of the upper deck, 73 premium economy seats will be laid out in a 2-3-3 format, offering 38 inches of pitch. Passengers will be able to enjoy a 15.6-inch touchscreen monitor, leg rest, as well as a six-way adjustable headrest. The economy-class cabin takes up the entire lower deck, with 383 seats laid out in a 3-4-3 configuration, with a 34-inch pitch and a 13.3-inch touchscreen monitor. Seven rows at the back of the lower deck will be taken up by 60 “ANA Couchii” seats, which are similar to economy-class seats with the exception of leg rests that can be fully lifted.

The aircraft also comes with a multi-purpose room where mothers can tend to their babies, and passengers can freshen up before arrival. 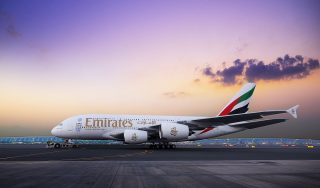