Conservationists will be delighted to know the story behind Alila’s new property. While old buildings are being demolished in other Asian countries to make way for skyscrapers, the boutique property developer chose to refurbish a 230-year-old structure to create the 59-suite Alila Fort Bishangarh. The hotel’s exterior. All photos are courtesy of Alila.

While interior walls were torn down to connect rooms and build an elevator, much of the original appearance has remained intact. In an interview with CNN, principal architect Ritu Khandelwal says, “Each window and entrance portal, arches and columns, railings and jaali screens (latticed window patterns), turrets and walls … everything had to be fully in sync with the original fort.” A nook in the suite

With panoramic views of the Rajasthani landscape, the building is a fusion of British and Mughal architecture, called Jaipur Gharana. It comes with two-meter-thick walls, battlement turrets, and regal arches. Majority of the furniture were sourced locally, while the surrounding villages provided many of the talented artisans needed during construction. Bespoke carpets, intricate decors, and artifacts were carefully placed in the rooms, many of which feature large bay windows and day beds. Day beds can be found in all suites.

Dining destinations include Amarsar, which is open round-the-clock; Nazaara, an open-air terrace lounge offering an all-you-can-eat vegetarian and non-vegetarian menu; and Madhuveni, which serves Indian tapas and organic cocktails. The bathroom inside the Grand Royal Heritage Suite. The Heritage Suites’ furnishings were made by local artisans.

Those looking for some rejuvenation can head to Spa Alila which offers relaxing treatments done by intuitive therapists. This being India, the spa also offers a range of yoga classes for those looking to meditate or simply burn a few calories.

The hotel at night.

Families wishing to experience new adventures can ask the hotel’s concierge team for customized tours, while a kids’ club has more than enough amenities to keep restless tots busy. The Fort at dusk 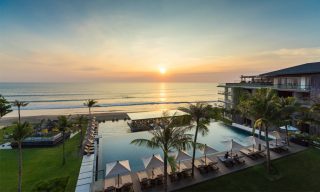 Members can look forward to earning and redeeming points when staying at properties like Alila Semin...