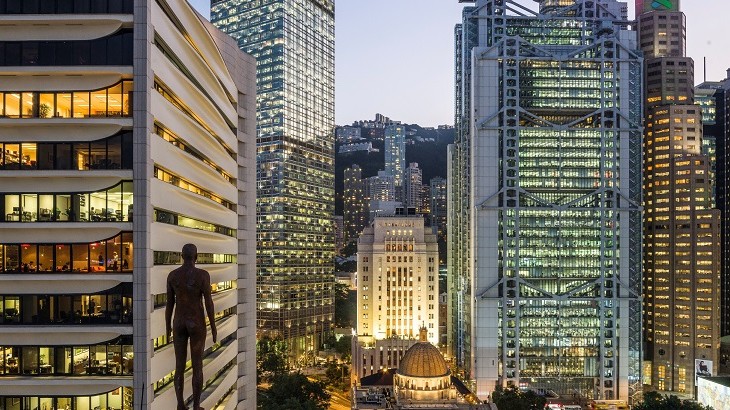 27 sculptures made of fiberglass will be found suspended on rooftops throughout the city.

Hong Kong this month welcomed one of the largest art exhibitions ever to be held in the city, and residents are required nothing more than the simple act of looking up to enjoy the spectacle. In an exhibition titled Event Horizon, renowned British sculptor Antony Gormley brings 31 human sculptures  to the city, four of which are installed on street level while 27 can be found on rooftops rooftops across a one-kilometer-wide zone in the city’s central and western district. Having previously installed these sculptures in London, Rotterdam, New York, São Paulo and Rio de Janeiro, Gormley aim to challenge the public’s relationship with the urban landscape and to make the world itself the subject of art and reverie as its residents engage with the collection of sculptures. The exhibition will run for six months until May 18, 2016, and is presented by the British Council Hong Kong with support from K11 Art Foundation (KAF).

“I am delighted to see that Event Horizon is launched in Hong Kong,” Gormley said. “Event Horizon captures the particular time of a particular body: a subjective place. The principle dynamic of the work is the relationship between imagination and the horizon, involving the citizen in a game of seeking and perhaps finding. Beyond those figures that you can actually see, how many more are out of sight? Where is the meeting place of earth and sky? Event Horizon engages Hong Kongers in the desire to look up and look again at familiar places in a new way, inviting reflection on human nature and our place in the wider scheme of things.”

Gormley’s other notable works include the Angle of the North in Gateshead, North of England, a public sculpture erected in 1998 and Another Place, which saw 100 sculptures of the artist’s own body permanently erected facing towards the sea in Liverpool after previously presented in several cities.