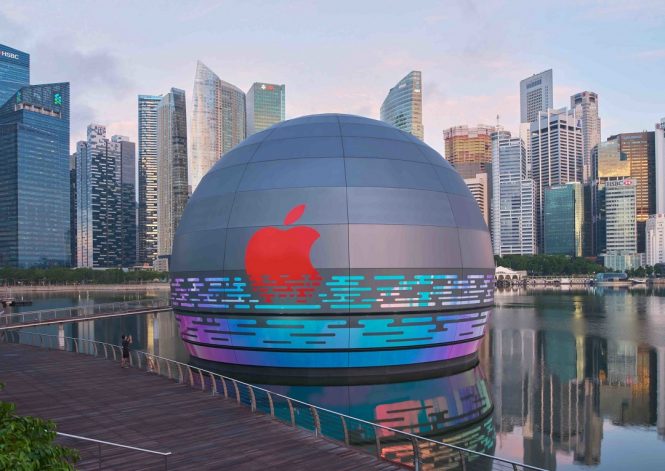 Not content with having a store inside Orchard Road’s Knightsbridge mall and a sophomore branch at Jewel Changi Airport, Apple is about to open its third outlet in the Lion City. The soon-to-debut location at Marina Bay Sands is billed as the world’s first Apple Store that floats on water, giving a whole new meaning to the term “apple bobbing.”

Housed in a spherical pavilion in an offshore space once occupied by the Avalon nightclub from 2011 to 2016, it will be accessible from the bay-front promenade via a pedestrian walkway. Some online sources say there will also be an underwater tunnel linking it to The Shoppes at Marina Bay Sands.

9to5Mac, a breaking news website focused on Apple and the world of tech, has published a series of marketing blurbs and colorful animations about the new store. These say Apple Marina Bay Sands was conceived as a “lantern on the bay” meant to evoke the Chinese lanterns carried during the Mid-Autumn Festival. The descriptions go on to explain that the pavilion’s dome narrows to an oculus, allowing some natural light to reach the interior, without disclosing any details about the overall layout. While Apple has not announced a definitive opening date, it will have capacity limits in place when that happens, alongside other health and safety measures in line with existing protocols at Singapore’s other Apple stores.

According to a teaser on its website, Apple Marina Bay Sands “will be at the heart of creativity, a place we’ve made for you to capture your ideas and passions. It will be a space for you to explore, connect, and create something new.”