Having a slow weekend brunch may not be a local tradition, but Bangkok—its tourists and locals—does it extremely well. Here we list 10 that are worth a try. This Ploenchit joint was founded by two friends, a Thai and an American, who thought that Bangkok needed an authentic bagel place of its own. Thus, this café was born, where bagels are “boiled and baked to perfection.” BKK Bagel Bakery also serves delectable sandwiches, salads, coffee, and dessert, making it one of the must-visit breakfast places in town.

Perfect for those who want to mix things up, this hipster café serves Western food (the usual burgers and sandwiches) as well as mouth-watering Thai dishes, such as Thai basil omelet, fried pork shoulder, and fried mushrooms. Highly rated online, Black Box BKK can be found serving locals and visitors alike on Ploenchit Road. Brooklyn Baker’s most well known offerings are actually its desserts. Its Facebook page is a showcase of the custom-made sweet creations that attract numerous customers to the casual dining place. Its eggs Benedict is highly recommended, as are the pancakes, spiced Middle Eastern dish shakshuka, and the thick, American-style buttermilk waffle paired with crispy chicken. Head down Soi Polo to enjoy what it has to offer. Pancakes topped with strawberries, blueberries, and chocolate. Photo courtesy of the Brooklyn Baker.

The Bangkok outpost of the New York dining spot owned by Neil Kleinberg, this café uses seasonal and fresh ingredients in most of its dishes. Not all of the American restaurant’s bestsellers can be found here, but expect to have all-time favorites such as eggs Benedict, biscuits, omelets, fried chicken, and waffles. Here’s a real treat in Bangkok: the pancakes’ rich maple syrup was sourced from maple trees in the United States. The French eatery has satisfied Bangkok residents and foreigners for many years, thanks to its combination of great food and homey service. Menu standouts are its light and crispy crepes, ice cream, and scrumptious pancakes topped with maple syrup and bananas. With two branches (one in Langsuan and another in Thonglor), there’s no excuse not to visit this destination. Chocolate ice cream with fruits–it doesn’t get any better than this. Photo courtesy of Crepes & Co.

With a majority of its dishes whipped up with local and organic produce, The Corner has become one of Bangkok’s choice breakfast places. The pared-down dining spot may not be as photogenic as other cafés, but the food more than makes up for it. Favorites include tzatziki (Greek cucumber yogurt dip) and baba ghanoush (eggplant dip). Located in the expat enclave of Sribamphen with a guesthouse on its second floor, the café is a good spot for making friends from all over the world. One of the mains offered on Wednesday Couscous Night. Photo courtesy of The Corner. 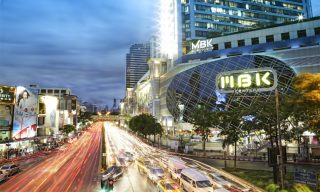