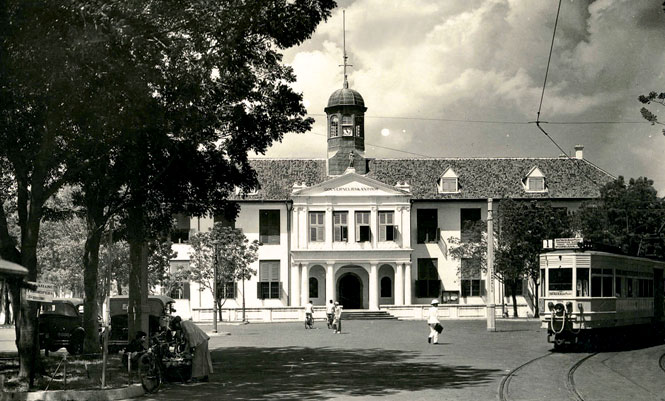 Above: A glimpse of the Indonesian capital’s colonial past.

Present-day Jakarta may not be a poster child for public transportation, but there was a time when the city boasted one of the region’s most advanced streetcar networks. Taken in the last decade before Indonesia declared its independence from the Netherlands, the picture above shows an electrical tramline running through Fatahillah Square, the onetime political center of the Dutch East Indies. While the trams are long gone, abandoned in the 1950s in favor of the buses that now clog the city’s streets, Fatahillah still looks much as it did then, bordered on the south by the 1710-built colonial town hall, which currently serves as the Jakarta History Museum. The city around it, though, today bears little resemblance to the Batavia of the first half of the 20th century, as the scenes depicted in Greetings from Jakarta: Postcards of a Capital 1900-1950 (Equinox) attest. Amassed by author Scott Merrillees, the photos and postcards that fill this new coffee table book are the result of 20 years of collecting and countless  hours of location research to accurately caption over 300 images. The result is a visual journey through a bygone urban landscape that is sure to fascinate Jakarta’s modern residents and visitors. —Angela Leenhouts