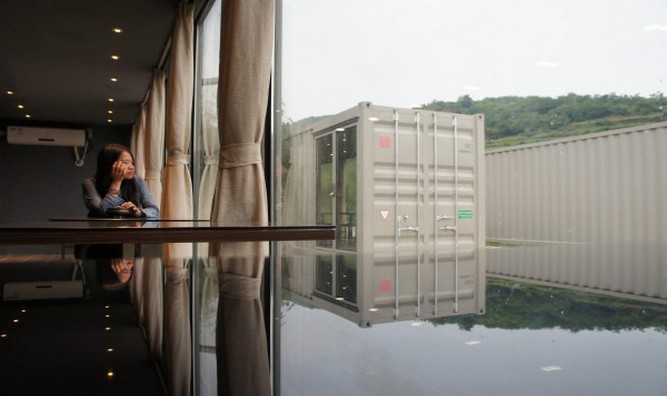 Above: The three Xiangs stand for incense, container and countryside.

We think it a safe bet that most of our readers will not necessarily associate beige shipping containers –or Twenty-foot Equivalent Units (TEU), as they are known in trade parlance– with a luxury boutique hotel, but a Chinese design company is going to change your mind.

Located in a village not far from Changzhi city, Shanxi province, the 21-room Xiang Xiang Xiang Pray House has been built using 35 TEUs on 5,000 square meters of grounds. The property is set to open in August and, although it has yet to be officially rated, the team behind the design feel confident their facilities are five-star standard.

Meng Qingdong, the village governor and developer of the project, said he had been moved to use shipping containers after the Japanese government imported them to use as temporary housing after last year’s earthquake and subsequent tsunami.

“It’s fast [to build] and [looks] good, and that inspired me to build the hotel,” he said.

The construction by Beijing-based Tonghe Shanzhi Landscape Design has also proved energy efficient. Designer Sun Jie said the development had saved approximately 60 percent in water and concrete consumption, and produced only 30 percent of the waste one would expect in a normal hotel of this size.

Xiang Xiang Xiang Pray House is due to open in early August. Rates have yet to be disclosed.