Well off the radar in the far north of Laos, hill tribes have been cultivating tea for centuries, making Phongsaly a must-go destination for any lover of the leaf.

Thunk. A bunch of knobby green tea seeds lands at my feet. Five meters above, the man who dropped them, Phayasi, is laughing at the look of surprise on my face. I had been so distracted watching the red morning sun emerge and fill the cloud-wreathed valley with warm light that for a moment I forgot where I was. The falling seeds—Phayasi’s gift to me—snap me out of my reverie.

It’s 5:30 a.m. Phayasi and his wife Minkhone—both in their sixties—are perched high in one of the treasured 400-year-old tea trees of Komaen village, a Phunoy tribal community in the northernmost Lao province of Phongsaly. The gnarled branches bend and sway alarmingly as Minkhone’s face appears from behind the leaves, her expansive forehead framed by a red pom-pommed hat. Barefoot, the pair work methodically in the morning chill picking just the top two leaves and spear-like bud from each twig. Once aged and processed, these will be used to make the superb tea that Phongsaly is known for among connoisseurs.

This wild, mountainous region, whose old provincial capital (also called Phongsaly) sits at 1,460 meters above sea level, provides ideal growing conditions for Camellia sinensis, the tea bush. Given that it neighbors China’s Yunnan province, where Tibet-bound caravans on the ancient Tea Horse Road once stocked up on Pu’er tea, it was perhaps inevitable that this remote corner of Laos also became a center for tea production. As one legend goes, when an old Chinese traveler lay down in front of a local temple and died, the camellia leaves in his pocket took root in his stomach and voilà, tea was born in Laos.

Luang Prabang–based photographer Paul Wager and I follow Minkhone and Phayasi three kilometers back to their home as the day warms up. We dodge a swayback pig and mount a steep set of stairs to enter the traditional wood-and-bamboo house. Over an open fire, our driver and interpreter are already making breakfast—pork with noodles, omelets, and sticky rice. Before we eat, Phayasi opens a hemp bag and buries his nose inside, inhaling deeply. A small, almost imperceptible smile indicates he is happy with this batch of leaves that he picked a year or so ago. He puts a handful of them in a teapot with some boiling water from an old dented thermos, letting the leaves soften for a few minutes before adding more water. This, he explains, is maocha, the raw or “unfinished” tea from which all Pu’er is made. Floral, grassy, and slightly bitter, the pale-yellow infusion is delicious.

Later, we take a walk up the village’s cobbled streets. Everyone in Komaen, it seems, is involved in the tea business. We stop in front of a couple named Si and Levy who are lighting a fire under a huge wok set at an angle in concrete. As the metal heats up, Si tips in a bag of freshly picked tea leaves, stirring continuously as they fall. Always in motion, her hands toss and pull, until eventually the heat becomes too much and she slips on a pair of old cotton gloves to finish the job. The cooked leaves, their aroma filling the air, are passed to older women with wonderfully weathered faces to roll and dry in large circular baskets under the sun. Rolling—or “disruption” as it is otherwise known—breaks down the leaf structure and initiates the process of oxidation, releasing the flavor. Later, the processed leaves may be lightly fermented and aged to make oolong, or fermented longer to make Pu’er-style tea.

In nearby Sayloum village, I drink sa bang tea with Madame Kham while her cat, its back to the still-smoking fire, snores quietly. At 58, my host still processes her own leaves. It’s this personal touch that makes Lao tea special, particularly when it comes to making sa bang, which involves stuffing wild tea leaves into bamboo tubes and then steaming them. When removed, the leaves retain a tubular shape that looks like a dictator’s cigar, each with its own distinct aroma and taste—some of earth and grass, others of flowers and breezes.

The next day sees Paul and me heading north to Nhot Ou, which has the look and feel of a Chinese frontier town. The guesthouse we check in to is clean and comfortable, but we’re really only here to visit a nearby village of Yao people who harvest one of the last stands of wild tea left in Laos. Only five kilometers from the border with Yunnan, the community is culturally and economically linked more to China than to Laos; the village head, a man named Syeuthsan, keeps accounts using elegant Chinese calligraphy, and there are small paths used to carry tea across the border.

I join of group of Yao pickers on a foray to the tea forest, which begins with a 40-kilometer motorcycle trip across the face of a mountain. The path is slippery and only half a meter wide in some spots; eyeing the sheer drop to our right, I decide I’m too old for this. Thankfully, Syeuthsan is driving, and he’s clearly accus-tomed to the route. We then wade through a glitteringly clear stream where some of the most fascinating insects I have ever seen seem to find me equally fascinating. Finally, we arrive at the forest. The tea trees are older and spindlier than those back in Komaen, but the Yao zip up them as though they are sturdy oaks and fill their cloth bags with the choicest leaves.

Back at the village a tea ceremony unfolds. Old men sit on low stools smiling and nodding at us, passing around a gurgling bamboo pipe. A plastic box is opened and out come exquisite porcelain bowls and tiny glass cups, which are arranged on a bamboo tray. The ritual is solemn, respectful, and mesmerizing, and the tea itself is rich and complex. Outside, a rooster stands proudly on the back of a pig lying below trays of drying tea.

Our journeys ends in Phongsaly town, where we walk the stone-flagged streets of the old quarter as the sun sets on some of the best examples of traditional Yunnanese architecture left anywhere. The floral scent of tea emerges from the evocative wooden buildings and pervades the cooling air.

Oh, and the seeds that Phayasi gave me? I leave them with Paul to plant in Luang Prabang’s botanical garden. By the time you read this, they might already have started to grow.

Getting There
A new Chinese-built road has helped ease the drive from the neighboring province Oudomxay, but it’s still a hard eight-hour haul. Thankfully, there’s now a regular Lao Skyway light-aircraft service to the airport at Boun Neua, an hour’s drive from Phongsaly town.

When to Go
The tea harvest in northern Laos starts in April and continues for three to five months.

Where to Stay
Accommodation in and around Phongsaly town is basic but comfortable and clean. The pick of the bunch is the hilltop Phou Fa Hotel (856-88/210-031; doubles from US$25), which occupies the old Chinese consulate building. It’s a little rundown, but the views from its garden are beautiful. Be sure to book a VIP room. 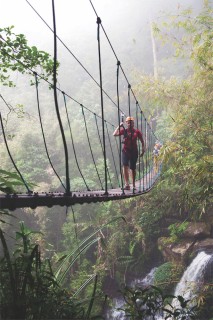 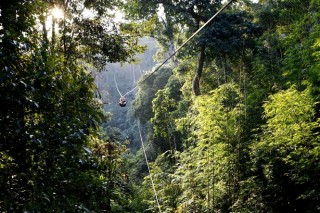 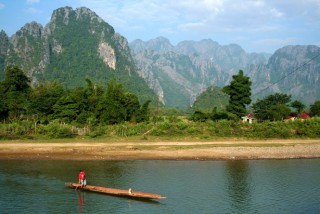