Visions of sharks are no longer relegated to ocean waters. With the partnership between Brussels Airlines and Moulinsart, a shark can now be seen cruising the skies on Brussels’ new Tintin-inspired livery. Baptized as “Rackham,” one of Brussels Airlines’ A320s has been painted to look like a shark-faced submarine with Tintin and his trusty companion Snowy inside, based on the cleverly incognito submarine from the Tintin adventure, Red Rackham’s Treasure. The aircraft’s interior has been given comic touches too, with rear cabin walls donning images of Tintin and Captain Haddock from the same adventure. If you’re unfamiliar with the story, don’t worry: Red Rackham’s Treasure is available for reading on board in Dutch, French, and English.

The joint project between Brussels Airlines and Moulinsart, the company that protects the work of Tintin’s Belgian creator Hergé, is part of the airline’s effort to be an ambassador of Belgium. Currently, Belgium’s flag carrier promotes the country’s gastronomy with its Belgian Star Chefs program, offers Belgian products on board its flights, and has partnered with the Belgian national football team The Red Devils and the world’s largest music festival Tomorrowland, annually held just outside of Antwerp.

Rackham’s unveiling and maiden flight to Toulouse took place on March 13, and fans can follow its whereabouts on the airline’s website. If you happen to spot this special livery, be sure to snap a picture and post it with the tag #SNRackham by April 30; the most beautiful shot will win return tickets for two to any of the airline’s European destinations. Photography competition aside, the Tintin livery will remain in operation until 2019. 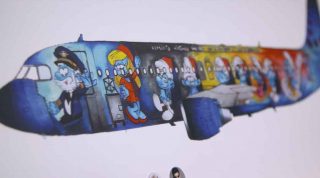