Hong Kong’s flag carrier is allowing some customers to go without facial coverings while asleep. 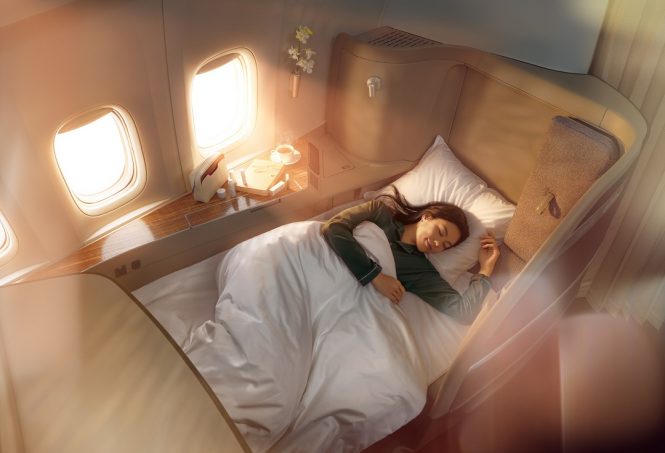 According to an internal memo shared with Cathay Pacific cabin crew, passengers in first and business class are now exempt from the prevailing mask-wearing requirement when sleeping on a fully reclined lie-flat seat. The airline has suggested the risk of Covid-19 transmission is lower in premium classes because seats are more spacious and have partitions, while the aircraft has been fitted with hospital-grade HEPA air filters. Face masks were first made mandatory for all Cathay passengers in May 2020, and fliers are not allowed to remove them unless consuming food and drink.

Cathay Pacific has been struggling to stay afloat due to the Covid-19 pandemic. Last Friday, the Hong Kong government confirmed that it was going ahead with a new 14-day quarantine requirement for locally based pilots and cabin crew on incoming long-haul flights. The rule is set to take effect on February 20; affected aircrews will have to undergo self-isolation at a hotel and be put under medical surveillance for another week. Senior figures at Cathay have predicted that the stringent quarantine requirement will reduce overall passenger capacity by 60 percent and increase the airline’s monthly cash burn by a further HK$300-400 million (US$38.7–51.6 million).

In more positive news, the Civil Aviation Authority of China (CAA) has granted Cathay permission to take over 15 Chinese routes from its defunct regional subsidiary Cathay Dragon, which was dissolved last October. In addition to its existing services to Beijing and Shanghai, the carrier now has rights to fly to nearby Guangzhou, Haikou and Sanya in Hainan Island, Chengdu and Chongqing in the southwest, and Xi’an in the northwest. Wuhan and Zhengzhou in the central heartlands are also covered, alongside the eastern cities of Hangzhou, Nanjing, Ningbo, Wenzhou, and Qingdao, not to mention Fuzhou and Xiamen in Fujian province. These routes will be split between Cathay Pacific and its low-cost arm HK Express; it is not yet known when flights will begin.

But five Chinese cities formerly served by Cathay Dragon — Changsha, Guilin, Jinan, Kunming, and Nanning — were left off the airline’s application to the CAAC, indicating that they will likely be permanently dropped from Cathay’s route network.