Endearing ballads, dance-worthy jingles, and stunning choreography make this musical a worthy one to watch. 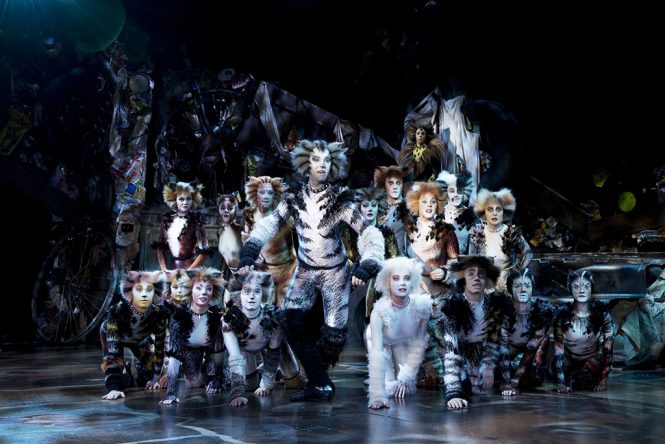 Cats on the prowl.

It’s hard to put a finger on the magnetic appeal of Cats, the quirky yet endearing Broadway musical hailing from London’s West End. Whether you’re merely familiar with the tune of Memory, a hardcore fan who can recite the names of the Jellicle cats or a dance lover who appreciates the demanding choreography, there’s something for you in the two-hour-long theatrical spectacle.

Now showing at Singapore‘s Sands Theater for a limited time, the charming musical is based on playwright T.S. Eliot’s Old Possum’s Book of Practical Cats—a collection of poems that lists typical cat characters, from the winsome to the naughty. Coincidentally, a new film adaptation of the same tale has recently debuted at the cinemas, much to the dismay of viewers due to its baffling digital fur technology. We say, spare yourself the terrifying visuals of these anthropomorphic cats and watch the musical instead.

Set against the realistic backdrop of a moon-lit junkyard, the musical starts with the familiar Overture as lights sparkle like stars across the stage. Then, we’re introduced to a motley crew of cats with the upbeat numbers Jellicle Songs for Jellicle Cats and The Naming of Cats.

What on earth’s a Jellicle cat, one might ask. According to the songs, they are a supreme species of the cat world, with the ability to dive through the air like a flying trapeze (cue an actual performer zooming past on a trapeze) and turn double somersaults.

Swathed in catsuits and furry leg warmers, the performers appear on stage with graceful feline moves, from arched backs to soft paw steps and elegant back rolls. Their painted faces wild with playful expressions to evoke the feel of these lithe creatures. The show’s iconic choreography is showcased in stunning measure as the dancers launch into balletic movements with swift pirouettes, fouetté turns, and pas de chat—which literally means the step of the cat. 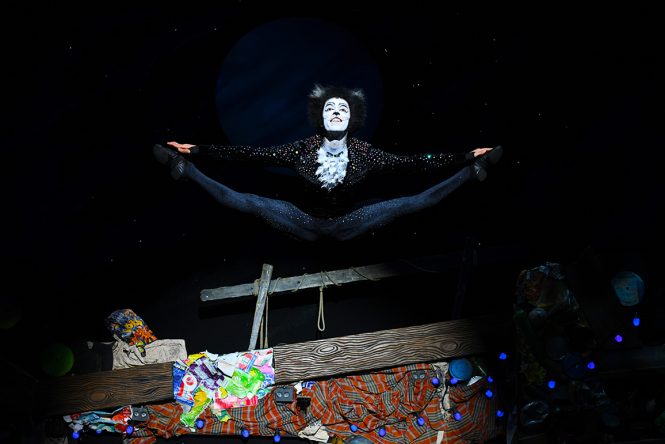 The purpose of their gathering is the Jellicle Ball, an event where the cats must prove their worth to the wise and benevolent leader Old Deuteronomy, so as to ascend to The Heaviside Layer and be reborn into a new life.

With much pomp, each cat takes the spotlight, performing high energy numbers that tell of their own life story. Among the larger-than-life characters, we found ourselves gravitating towards the motherly Jennyanydots, an old cat who cares for the little ones. While initially clumsy, she surprises us with her formidable tap dancing skills soon after. Clever and cunning, Mr. Mistoffelees, demonstrates his penchant for magic with a beautiful solo filled with triple jumps, fouettés, and well-timed confetti explosions. Meanwhile, Macavity—his name a literary allusion to a criminal mastermind in the Sherlock series, is a mystery. His ability to wreck trouble without anyone’s realization makes him somewhat of a hero among the Jellicle tribe. The unlikely protagonist is Grizabella, a lonely and decrepit cat who’s seen much better days. While making her entrance early in the musical, her mangy appearance is repulsed by the rest of the cats. Having left the Jellicles a long time ago, the once-glamorous feline now struggles to find acceptance. Through her attempts to dance like the rest at the ball and her persistent pleading, she is eventually received back into the tribe, first by kitten Jemima, then the rest.

As the two sing a duet in harmony, the soaring voices of the young and old cat bring to life the bittersweet ballad Memory. Jemina’s bright soprano notes evoke hope for a new dawn and a shining future ahead, while Grizabella’s dramatic range shows a sense of determination to be reborn into a new life. At the song’s end, it was clear that she deserved to be picked for The Heaviside Layer, with the cats egging her on with the hymn-like Journey to the Heaviside Layer.

The musical runs from now until January 5, 2020; more information here.