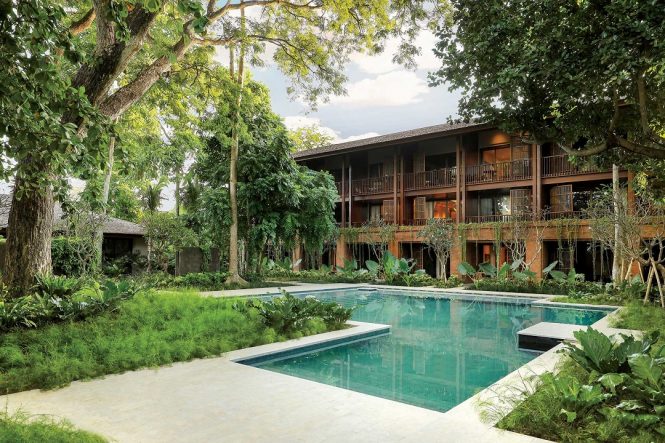 Shaded by lush, decades-old trees, Andaz Bali feels like it could have been here forever, though it only opened in April as the first Indonesian property of Hyatt’s boutique-style Andaz brand (and the first Andaz resort in Asia). Together with the adjacent Hyatt Regency, it’s built on the former grounds of the legendary Bali Hyatt, which closed its doors in 2013 after a 40-year run. And while Sanur may have lost the cachet it once had as Bali’s original beach resort, the decades since have seen it mature into a serene corner of the island where jogging tracks are busier than beach clubs, jazz is more popular than hip-hop, and days begin early, especially for those who enjoy a good sunrise.

Andaz Bali is not the first high-end resort to style itself as a modern take on a Balinese village, but it does so with aplomb. The firms responsible for the layout, architecture, and interiors — Bangkok-based Tierra Design and Design Studio Spin of Tokyo — took their inspiration from various eras and locations in Bali to create an immersive sense of place. Beyond a monumental red-brick porte-cochère that recalls the gateway to an old Balinese palace, guests are greeted in a high-ceilinged lobby pavilion illuminated by gigantic teardrop light bulbs. This in turn leads to the Village Square, the communal heart of the property where most of the restaurants are located. From here, the complex, which was built around the site’s existing trees, is crisscrossed by narrow pathways interspersed by ponds, fountains, gnarled frangipani trees, and terra-cotta walls caressed by cascading foliage. 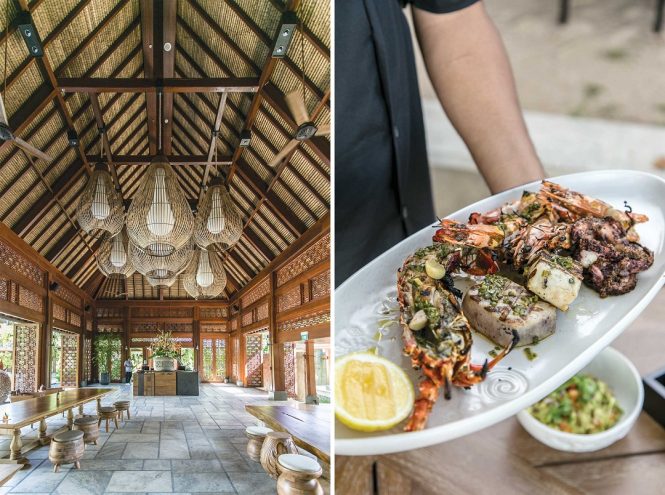 Left to right: The lobby; a grilled seafood platter at the Fisherman’s Club. (Photos: Joe Sabarto)

Spaciousness is one of the resort’s calling cards. The smallest of the 127 rooms here measure 66 square meters, considerably larger than most of the guest quarters at the Hyatt Regency next door. There are also 22 villas, four of which face the ocean. In line with the hotel’s village theme, rooms are spread out in several low-rise clusters whose Balinese names denote the cardinal directions: Daja, Delod, Dangin, and Dauh. Interiors smartly blend local materials — plaited bamboo, pandan-leaf drawer panels, batik headboards — with a host of contemporary touches such as heated toilet seats, motion-activated lighting, and big Chromecast-equipped TVs.

Another highlight is the food, which is overseen by Swiss chef Nadine Waechter-Moreno, one of the island’s only female executive chefs. Set next to the main pool deck and just a few steps from the beach, the Fisherman’s Club restaurant takes its cues from the popular seafood stalls of Jimbaran Beach on Bali’s southwest coast: think catch of the day grilled over coconut husks alongside dishes like hamachi ceviche and barbecued octopus. Breakfast is served at Wok Wok, overlooking the Village Square. It’s a varied menu to say the least: options range from the usual eggy suspects to sambal-spiced prawn omelets, babi guling (roast suckling pig) rillettes, and soto Madura made with braised Australian beef shank. Two more restaurants — Mediterranean-leaning Blue Oven and carnivore-centric Fire Fox — are set to join the culinary lineup later this year.

The Andaz, it must be noted, does not have its own spa or fitness center; those facilities it shares with the Hyatt Regency, which can be accessed via a private walkway connecting the two properties. But in all other respects, Sanur’s newest resort is a self-contained universe where the emphasis is on complete comfort (Jl. Danau Tamblingan 89A; 62-361/320- 1234; hyatt.com; doubles from US$248). 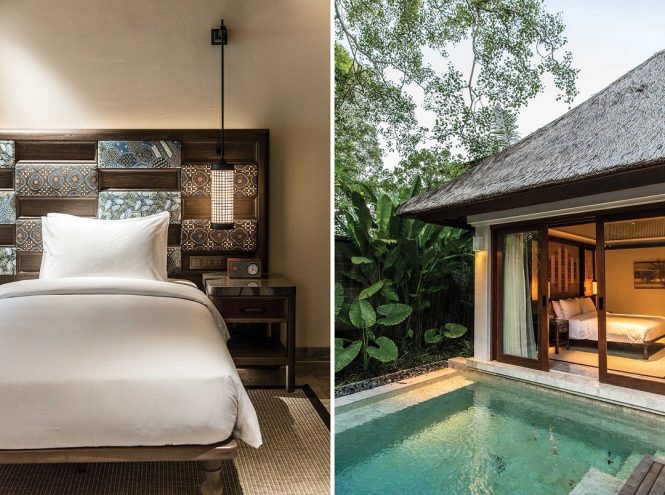 Left to right: A guest room; one of the resort’s pool villas. (Photos: Joe Sabarto)

This article originally appeared in the June/August 2021 print issue of DestinAsian magazine (“Settling In Just Fine”).