Conrad Manila announces the brand’s arrival in the Philippines with a bayside property that is coolly restrained and full of local flavor. Cruise ships inspired the fluid shape of the hotel.

With its cruise ship-like lines, the Conrad Manila, designed by Singaporean firm WOW Architects, is a striking addition to the Manila Bay waterfront, with undulating bands of white that flow and contort over rounded corners. A large steel-and-fiberglass sculpture of sea plants suspended in the compact welcome lobby makes a fitting prelude to the sprawling reception area two floors up. Once the elevator doors open, guests are greeted with a sun-drenched space featuring a graphic carpet, a lipstick-red installation inspired by pencil shavings, and floor-to-ceiling windows looking out toward the water. This interplay between art and sweeping sea views is found throughout the property, which houses 635 works by notable contemporary Filipino artists including Leeroy New, Reggie Yuson, and Olivia d’Aboville. The interior of the Diplomatic Suite.

Besides the usual creature comforts, Conrad Manila’s 347 guest rooms are also equipped with intuitive technology that automatically adjusts the temperature, opens or closes curtains with the help of motion sensors, and sets ambient lighting according to the time of the day. The color palette is muted and the aesthetic is restrained, with sofas positioned by the panoramic windows—book a room with sea views, and you may never get off the couch. Stunning views of the bay from Brasserie on 3.

Brasserie on 3, the hotel’s all-day restaurant showcases Filipino cuisine—bistek tagalog, Ilocano pork belly—alongside international fare, with an emphasis on sustainable and organic ingredients. At C Lounge, which opens onto a sleek alfresco area, house cocktails also come with a local twist. The martini gets a makeover with the Sampaguita-tini, named for the Philippines’ national flower, while mango takes pride of place in the Mangga-rita. When you’re not luxuriating in a traditional Filipino massage at the Conrad Spa or training at the 24-hour fitness center, feast on celebrity chef Jereme Leung’s mod-Chinese delicacies at China Blue. Steamed truffle mushroom buns are a standout, as is a succulent dish of deep-fried shrimp with wasabi and mango salsa. Subtle touches in the restaurant’s decor account for even the smallest details, down to the hand-painted service plates and teacups depicting Mongol warriors on horseback. On a Saturday night, reserve a table by the window for the best view of the firework display at 7 p.m., held by the nearby SM Mall of Asia. 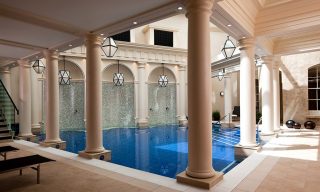 Checking In: The Gainsborough Bath Spa

If soaking in natural thermal springs is your idea of blissful luxury, this 99-room hotel is the per...