In a less-visited corner of Indonesia, a locally born entrepreneur pays tribute to the indigenous tribal culture through her own cliff-top resort. 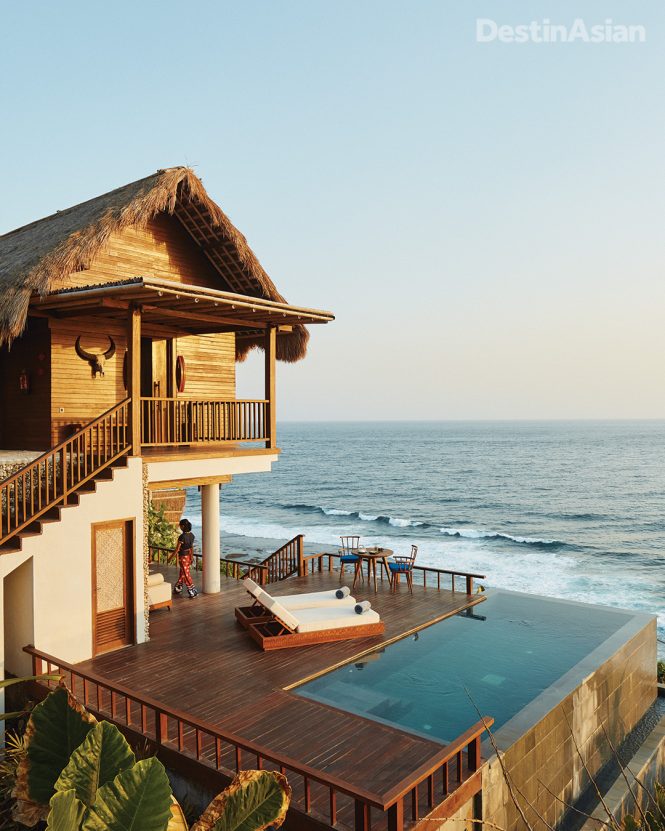 A 50-minute flight is all that separates Bali from the eastern Indonesian island of Sumba, and yet it feels as though you’ve landed in a different country. The landscape is not characterized by towering volcanoes but undulating savanna-clad limestone hills; its rugged coastline remains wild and untamed; and the island’s age-old tribal heritage is underpinned by Marapu, the animistic belief system still practiced here despite a widespread conversion to Christianity in recent decades. Sumba has been touted as the next big thing in Indonesian tourism for some time now, and the road from Tambolaka airport, where I fly in, was recently widened in anticipation of new developments along the southwest coast. Case in point? The first luxury resort on the island by an Indonesian hotelier.

Named Lelewatu (“stone bracelet”) after a local rock formation, it opened last March with 27 cliff-top villas overlooking the Indian Ocean from a steep 10-hectare site just down the coast from Nihi Sumba Island, the former surf lodge that first put Sumba on the map for the globetrotting elite. Two years and US$35 million in the making, Lelewatu is the brainchild of Bali-based Jenny Tan, who was born in the nearby market town of Waikabubak. Tan is no stranger to the hospitality industry: she already owns and operates two four-star hotels and an all-villa resort in Bali’s Seminyak area. But Lelewatu marks a significant step up for the homegrown entrepreneur. All this raises an inevitable question, given its proximity to Nihi and the fact that both properties cater to the same sort of high-end traveler: is Lelewatu meant to compete with the likes of its famous neighbor? Tan tells me she believes in more of an unspoken “collaboration,” pointing out a common goal to showcase Sumba’s rich culture and artistic traditions to a global clientele. To achieve that effect, Tan commissioned the prominent Balinese architect Popo Danes to build a resort modeled after the local Marapu villages. It borrows elements of Sumba’s vernacular architecture, particularly the steeply pitched roof that is a defining feature of the high-hatted Sumbanese uma mbatangu, or “peaked house.” From the outset it was both Danes’ and Tan’s desire to keep things natural: teak, merbau, and ironwood predominate, while stone excavated from the cliff face was recycled in the resort’s construction. About half of the materials were locally sourced, including the bamboo used throughout the villas and the alang-alang grass cladding the roofs. 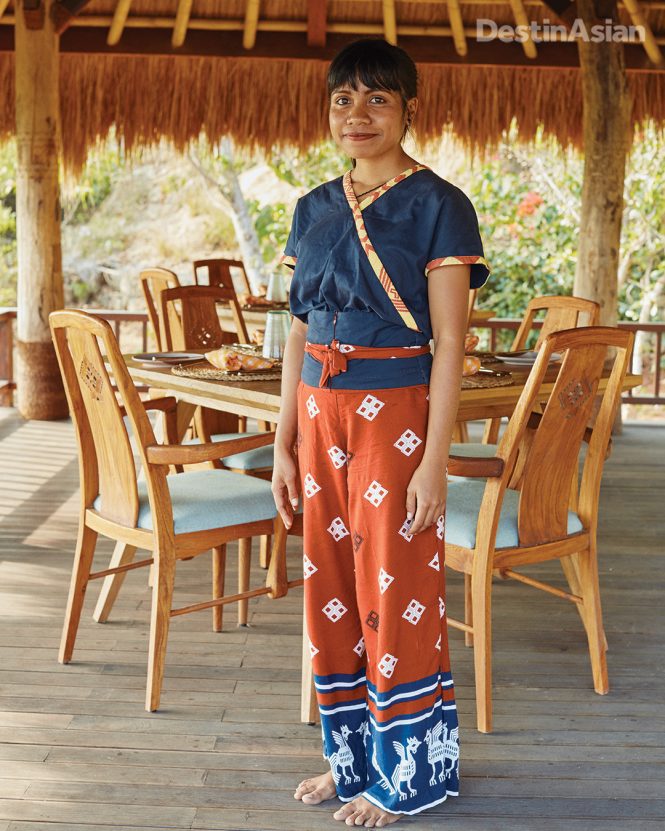 The sense of place also extends to Lelewatu’s interiors. All villas feature brightly colored accents of handwoven ikat from the island—these adorn headboards, come draped as runners across the four-poster beds, and are upholstered on cushions. Occasionally buffalo horns and tribal sculptures make an appearance, as do roughly hewn timber columns carved with local motifs. Nor does Lelewatu compromise on luxury. Spacious marble bathrooms have double vanities and standalone tubs, while a covered bamboo pavilion and a daybed provide the perfect excuse to while away an afternoon beside your private plunge pool. The sole villa without a pool of its own is Uma Humba (“Sumba House”), where eight single beds in an open-plan space mimic the style of communal living found in Marapu villages. Couples should opt for the two split-level Honeymoon villas, whose bedrooms are raised above an expansive pool deck—ideally placed for admiring both the sunrise and sunset—complete with a spa treatment area. 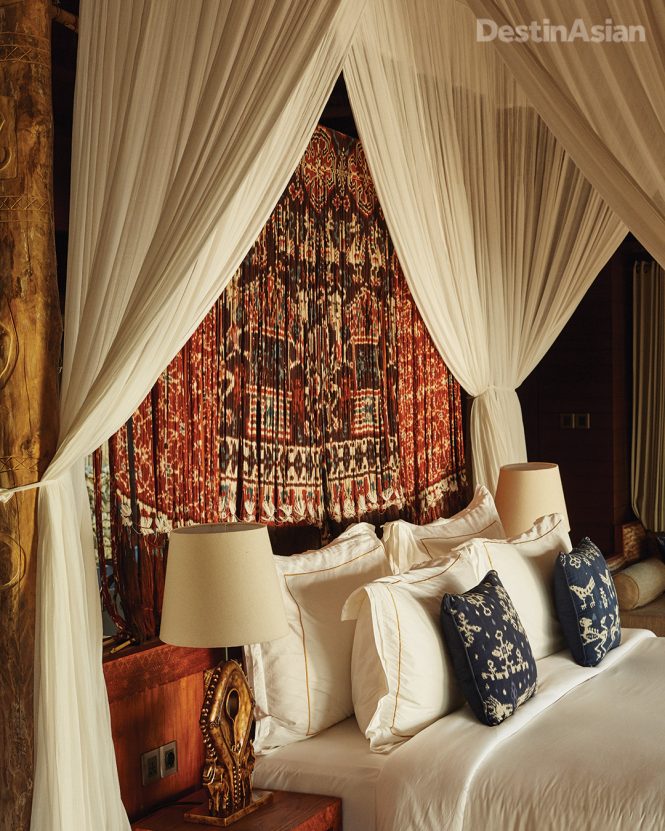 Beds at the resort are backdropped by Sumbanese ikat.

The lack of a beach is a downside, though I imagine most guests would be content with the 180-degree vistas of the wild Indian Ocean surf from their villas or the main infinity pool. The same views can be enjoyed at Bokosawu restaurant, where Jakartan chef Reno Sabardi leverages on a previous stint in the Maldives to create artfully plated dishes off a menu based around Sumbanese ingredients and recipes. Starters might include a salad of mango jelly, papaya flower, orange, and prawn, or kuah asam Sumba—a flavorsome turmeric-and-tamarind soup that yields lobster, prawn, and scallop. For mains, you can’t go wrong with freshly caught tuna dressed in spicy dabu-dabu sambal, or, my favorite, kapu’u patunu, which pairs grilled fish with stir-fried banana hearts. 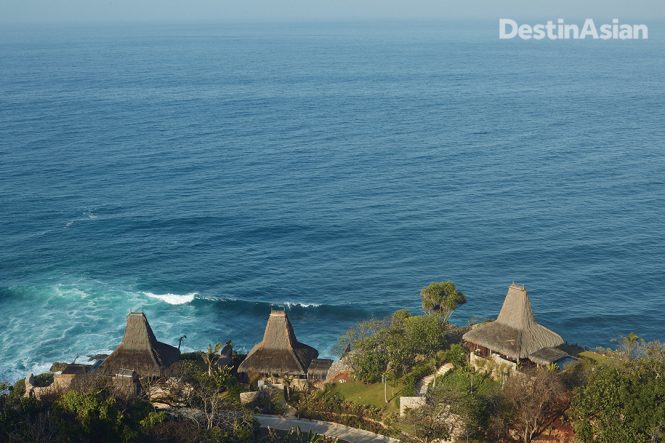 But Lelewatu’s greatest asset is arguably its team of 24-hour butlers. As with almost all the staff members here, they have been recruited from local hospitality colleges in Waikabubak and the neighboring town of Waitabula. Butlers also act as chaperones on itineraries tailor-made to the interests of each guest, with half- or full-day tours to explore the myriad attractions beyond the resort: uncrowded golden-sand beaches and saltwater lakes, jungle waterfalls and surf spots. Don’t miss out on the chance to visit Marapu villages like Wehola, a 15-minute drive from the property, where clan elders will gladly explain the role that ancestors play in their everyday life. Stay on Sumba any length of time and you’ll see exactly why Tan has branched out to the island of her birth.