Fresh from the most extensive renovation in its 110-year history, Madrid’s Hotel Ritz — now the Mandarin Oriental Ritz, Madrid — has embraced the 21st century without losing any of its original allure. 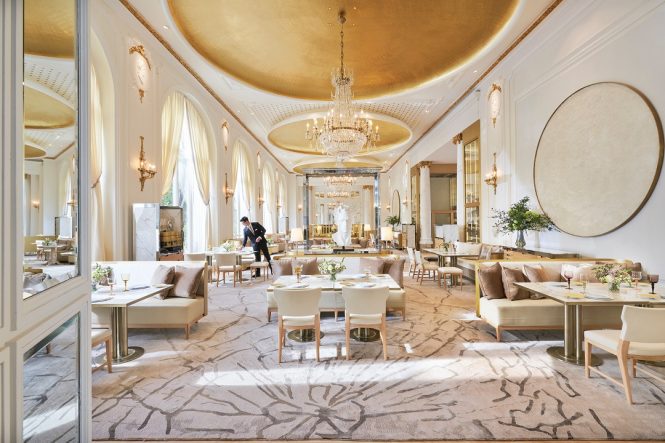 Just past the Prado Museum on the grand Paseo del Prado, the gleaming white Hotel Ritz rises above the plane trees in Belle Époque splendor. Opened in 1910 as Spain’s first luxury hotel, the iconic property was built at the behest of King Alfonso XIII, who wanted Madrid to have a place for visiting dignitaries to stay on par with the Ritz in London and Paris. It was the third and last Ritz to be developed under the supervision of César Ritz himself.

Plenty of famous guests have passed through its vaunted doors since. Spy and exotic dancer Mata Hari operated from its rooms, Salvador Dalí drank in the bar, and Grace Kelly honeymooned here with Prince Rainier of Monaco. But the Ritz was always — and quite uniquely in Spain — a place not just for visitors but also for generations of Madrileños, who celebrated baptisms and graduations under the hotel’s ornate chandeliers and sipped coffee with friends in its spacious garden.

Not long after moving to Barcelona 25 years ago, I pushed through the Ritz’s revolving doors for the first time for a drink that I could scarcely afford. A decade later I finally stayed, spending time in its labyrinth subterranean kitchen to learn the keys to some traditional old-school classics for a cookbook I was writing. On my last visit, before the hotel (then part of the Belmond group) was sold in 2015, I went for its lavish Sunday brunch with some friends, followed by a much-needed stroll in nearby El Retiro Park. While still beloved, the Ritz had become “tired,” people were whispering. It closed in early 2018 for a three-year, US$200 million renovation and finally reopened in mid-April as the Mandarin Oriental Ritz, Madrid. Two weeks later I checked in for a two-night stay with heightened expectations — but also some trepidation. 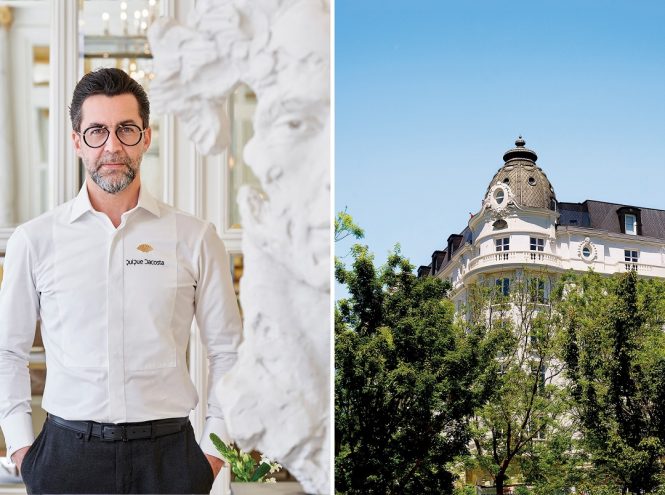 Any apprehension fell away immediately when I saw that although the overall design had a more contemporary tone, the hotel maintained its stately classicism and original architectural details. “Nothing aggressive,” one longtime member of staff said of the refurbishment. “It was more of a restauración.”

That was immediately clear upon entering: the hotel was flooded with light. While never dark, a cupola had replaced the interior courtyard’s original crystal canopy in 1936 when the Ritz was converted into a hospital during the Spanish Civil War. The renovation has seen the glass roof restored, following César Ritz’s original plans. This has fundamentally altered the atmosphere of the hotel and given it a more welcoming feeling. The old revolving doors have been ditched for more transparent ones, and the color palette lightened with accents of gold.

The room count was reduced slightly to 153, about a third of which are suites. Wanting to give these a feeling that was both “rich and calm,” French design duo Gilles & Boissier used the same pale and golden tones, hand-tooled Spanish leather details, and oak floors accented with plush rugs. Among the best rooms are the Turret Suites along the corners of the building, which come with oval living rooms and generous views out over the city. 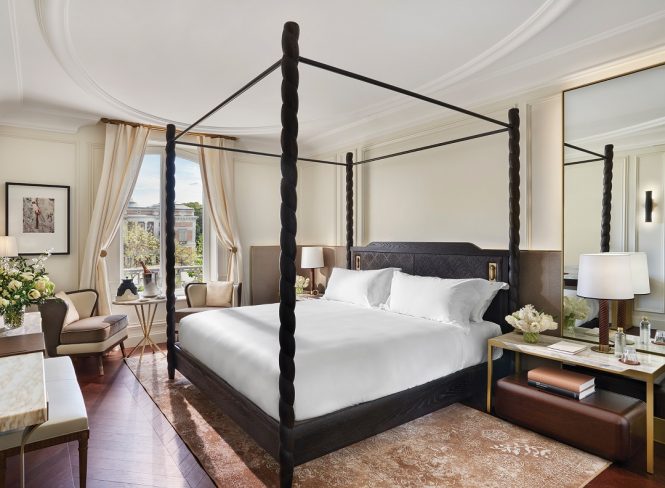 Now under the management of the Mandarin Oriental Hotel Group (which has a 50 percent stake in the property), there is a previously unseen level of service and attention to detail. I particularly appreciated the gourmet treats like a plate of hand-sliced ibérico ham and small, personalized gifts left in my room. Another significant change is the spa: the old Ritz didn’t have one, or even a pool. Created in partnership with local wellness and aesthetics center The Beauty Concept, the new 750-square-meter facility offers a heated indoor swimming pool, steam room, vitality pool, and fitness center alongside a range of massages and beauty treatments. Though my own journey to Madrid had taken a mere two and a half hours by high-speed train from Barcelona, I opted for the 75-minute-long facial recommended for those getting off a long flight. It was instantly rejuvenating.

Another significant upgrade is with the food and drinks. There are now five different dining spaces, all under the command of Quique Dacosta, one of Spain’s foremost chefs. The flagship is Deessa, where two extensive tasting menus showcase the imaginative brilliance that has earned Dacosta three Michelin stars at his eponymous restaurant in Dénia, Alicante, and two at El Poblet in Valencia. Dishes like the lemon-frosted Cuba Libre de Foie Gras or Violet Kefir Marshmallow with blueberries will certainly soon garner him more stars. 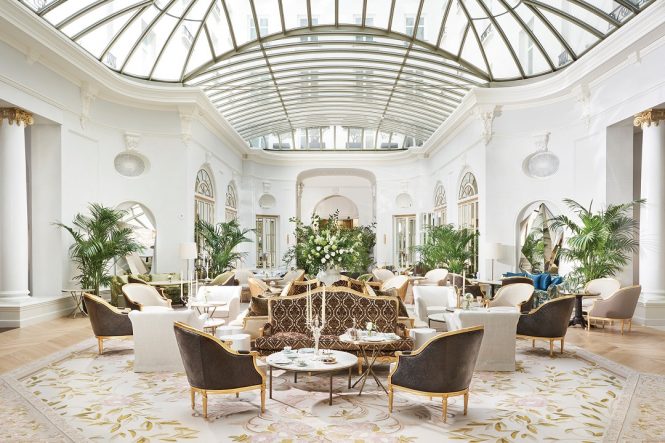 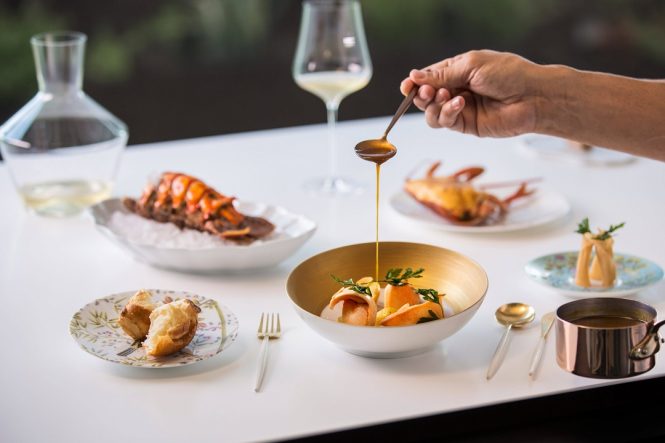 Under the central glass canopy, the Palm Court is the heart of the hotel and serves breakfast, lunch, and dinner. For lunch the day I arrived, I started with pillow-like potato soufflés filled with béarnaise sauce and topped with a paper-thin slice of beef carpaccio. Then came a punchy tomato tart. Both were excellent and original. But the creamy, densely flavored rice with woodcock livers, Morella mushrooms, strands of truffle, and wild herbs was simply sublime.

The Palm Court also serves afternoon tea, a tradition first offered with the Ritz’s 1910 opening and now brought back with regal splendor. It comes in three courses on tiered silver stands: the first held an array of delicate finger sandwiches, the second classical French pastries — head pastry chef Claudia Capuzzo makes them lighter with less sugar and less butter but just as delicious — and the third scones to be slathered in clotted cream and jam. “Under certain circumstances there are few hours in life more agreeable than the hour dedicated to the ceremony known as afternoon tea,” Henry James famously wrote. This was one such circumstance, although in my case it lasted two hours. Food is never rushed here — in the Ritz, or in Madrid. 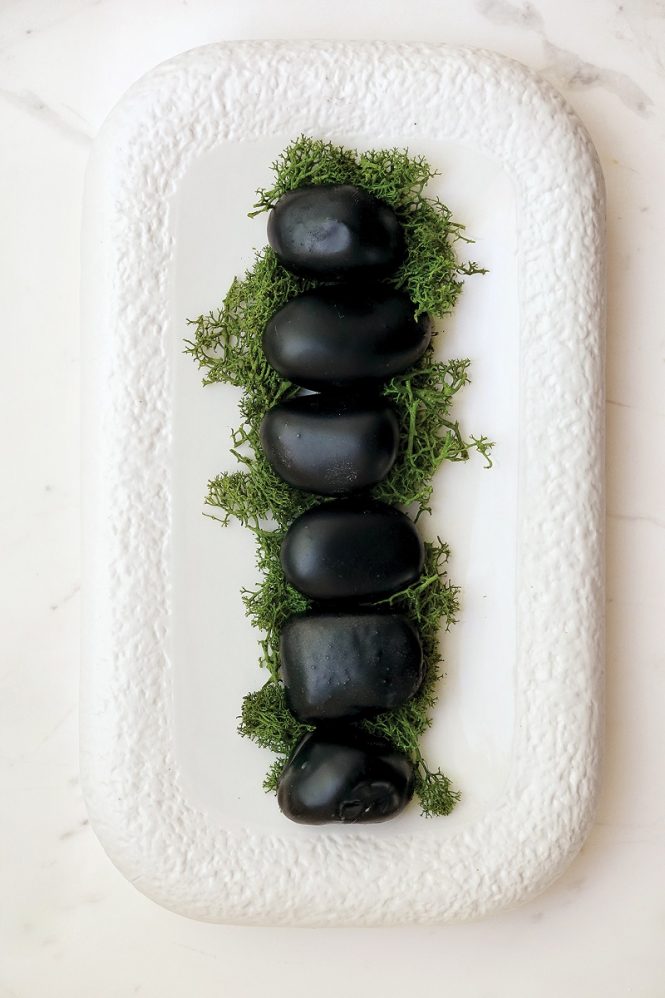 A Quique Dacosta creation, Parmesan Stones (whose creamy cheese centers are infused with black truffle oil and then bathed in cacao butter) are on the “Liquid Cuisine” menu at Pictura bar. (Photo: Jeff Koehler)

My stay’s gastronomic highlight, however, came in Pictura, the hotel’s bar. Along with all the classic drinks, the menu offers “Liquid Cuisine”: eight creative cocktails paired with an equally creative “bite.” At the suggestion of the white-jacketed barman, I started with El Guante (The Glove) — Tanqueray No. Ten with spicy radish, Italicus, and galangal honey — an easy-drinking tipple accompanied by a delicate but bitter marzipan-like tart drizzled with Campari and blood-orange syrup. The barman then brought over a white ceramic sphere. He lifted the top to reveal, once the smoke cleared, a glass of vanilla-infused mezcal, Bulleit bourbon, and hibiscus on the rocks: a sour, complexly flavored drink called La Luna (The Moon). It came with a razor-thin corn wafer topped with sweet caramelized onions and whole kernels of corn as light as space dust. The combination of flavors, textures, and aromas was perfect.

On the walls of Pictura hang gilt-framed portraits of Madrid artists taken by photographer Paula Anta, who dressed and posed her subjects in the manner of Old Masters paintings in the Prado Museum next door. Rooting her images in the city’s rich artistic traditions, Anta has created something both contemporary and classic. Gazing at the striking prints while sipping my cocktails, they seemed like a perfect metaphor for the Mandarin Oriental Ritz itself.

I had expected excellence when I arrived, but not to also find a hotel that felt so newly fresh and relevant while recapturing what had originally made it so special. 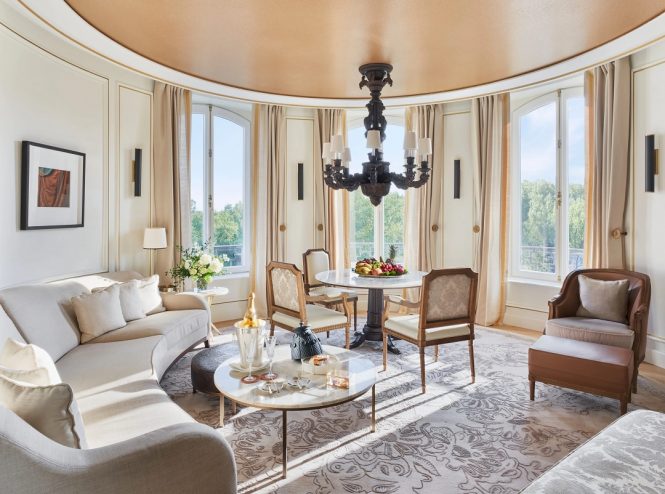 This article originally appeared in the June/August 2021 print issue of DestinAsian magazine (“Puttin’ on the Ritz”). 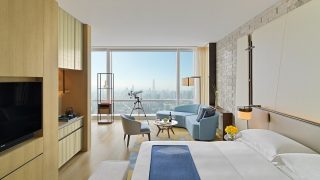 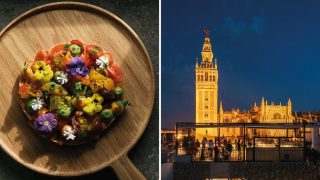