The world’s fourth-most populous nation has ramped up travel restrictions weeks before its most highly anticipated holiday of the year. 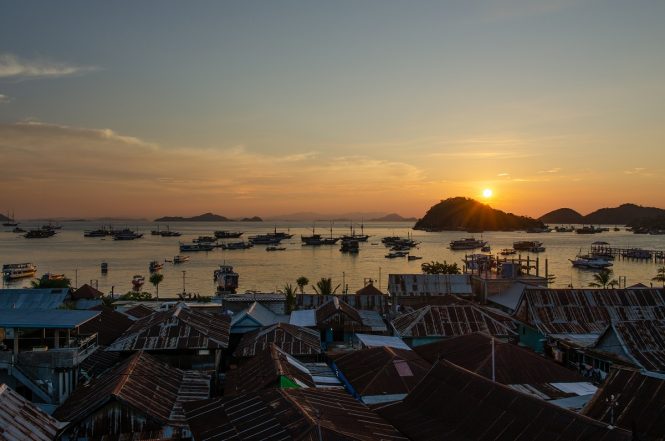 Sunset over the harbor at Labuan Bajo, the gateway to Indonesia’s Komodo National Park.

Indonesia’s government is now imposing strict controls on movement through May to limit the spread of Covid-19 across the archipelago. In a statement yesterday, the Ministry of Transportation spokesperson Adita Irawati announced that all public and private transportation by air, land, and sea would be banned from April 24, except for vehicles carrying cargo and medicinal supplies as well as those belonging to emergency services.

With the new measures in place, all domestic passenger flights must now be grounded until June 1. Although the government initially extended the ban to international services, that part has since been rescinded. National carrier Garuda Indonesia is still serving destinations around the Asia-Pacific region, including Hong Kong, Singapore, Bangkok, Tokyo, Seoul, Sydney, Melbourne, and Perth.

Similarly, all passenger transport by sea is being suspended until June 8. Ships plying the important crossings between Java and Sumatra as well as Java and Bali will no longer accept private cars and buses, while inter-island PELNI ferries—a lifeline for less well-connected islands on the nation’s peripheries—will only be allowed to transport cargo. It remains to be seen how the rules will be implemented and enforced on a local level, for instance, if small boats will continue to shuttle residents and workers between Bali and its dependent offshore islands.

Earlier this week, state-owned railway company PT Kereta Api Indonesia (KAI) announced that it was canceling its services on 70 long-distance and 31 local routes until April 30, but those suspensions have now been extended to June 15. KAI is offering full refunds for all those who have already bought tickets. And though highways across the country remain open, checkpoints have been set up by the police and the military to enforce the new restrictions on traveling by road, which are set to last until May 31.

The move follows president Joko Widodo’s decision on Tuesday to formally ban mudik, the annual exodus of tens of millions people from major cities such as Jakarta to their hometowns and villages to celebrate the Idul Fitri holiday at the end of Ramadan. The blanket ban took effect at midnight today (April 24), with all passenger travel in and out of affected “red zones” such as Greater Jakarta prohibited; the same rule applies to provinces, regencies, and cities implementing mandatory “large-scale social restrictions.”

These measures limit public gatherings to no more than five people; mandates the closure of schools, places of worship, and workplaces in non-essential sectors; and decrees that private vehicles should only be filled to half their total capacity. Drivers must keep the passenger seat empty or risk being given a written warning from traffic police.

Indonesia is relying on such regulations to curb the spread of Covid-19 instead of imposing a formal quarantine, which would legally require the government to compensate affected individuals and businesses. In an interview with prominent local journalist Najwa Shihab released yesterday on her YouTube channel, the president said that quarantining Jakarta, the main economic engine of the country and its Covid-19 epicenter, would cost his administration more than 500 billion rupiah (equivalent to US$32.4 million) per day. Any well-informed viewer will know that is a hefty sum the Indonesian government simply cannot afford.