The decision comes in spite of signs the outbreak is almost over, with just seven new Covid-19 cases recorded nationwide on Tuesday. 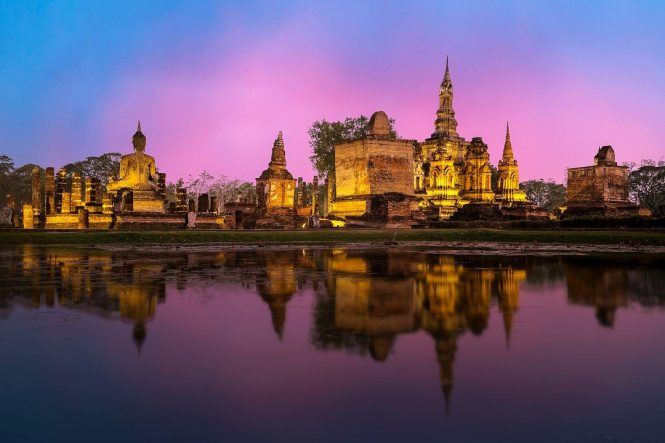 The ruins of Ayutthaya, a former Thai capital, at dusk. (Photo: Sasin Tipchai/Pixabay)

Thai prime minister Prayut Chan-o-cha has announced that country’s current state of emergency will be extended for another month, until May 31. Much of Thailand has been under a partial lockdown at the behest of the national government, which overrode provincial governors through an emergency decree invoked on March 26. The nighttime curfew now in force between 10 p.m. and 4 a.m. will continue.

Unlike what it did with Songkran, which was supposed to be held earlier this month, the Thai government has not canceled the four public holidays scheduled for May, namely Labor Day (May 1), Coronation Day (May 4), Vesak Day (May 6), and Royal Ploughing Ceremony Day (May 11). Even so, it has asked Thai residents to remain home as much as possible and hold off on their travel plans within the country.

Meanwhile, the Civil Aviation Authority of Thailand has extended the ban on inbound commercial flights for the same period. Only cargo services, repatriation flights, and emergency landings are exempt from this restriction. Domestic flights, however, will resume in a matter of days, with AirAsia Thailand set to make its return on May 1.

Thailand has done better than neighboring nations such as Malaysia and Indonesia in curbing the spread of the virus. A steady fall of new cases has been recorded since early April; the country logged just seven new Covid-19 infections today and two more deaths nationwide, taking the total to 2,938 cases with 54 deceased.

Given these encouraging signs, officials at Bangkok’s City Hall are now hoping to reopen businesses and recreational spaces in eight categories—ranging from restaurants and markets to exercise facilities, parks, and driving ranges—as soon as Friday. However, this plan is still pending a final decision by the National Communicable Disease Committee that will be made tomorrow. If it goes ahead, residents will have to adhere to social-distancing rules: diners at restaurants will have to sit 1.5 meters apart, while sports venues will only allow non-contact sports such as running, badminton, and table tennis.