Since the relationship between the United States and Cuba has improved, travelers have arrived in the Caribbean island by the multitudes, singing “Guantanamera,” usually off-key.

While the situation might revert to the pre-Obama era, the Cuban Thaw will continue for now, leading enthusiastic hotel chains to open properties to accommodate the deluge of tourists, including those from other countries.

The Geneva-based Kempinski Hotel is one of the many, and in June 7 it will formally launch the Gran Hotel Manzana Kempinski La Habana. The 246-room five-star accommodation was formerly the Manzana de Gómez, Cuba’s first European-style shopping mall. Situated across the Havana Opera House and within the historical Old Havana, the structure was refurbed to include bars, restaurants, a spa, and a rooftop pool. Historical Havana as seen from the property. All images are courtesy of the hotel. Designed by South African husband-and-wife team Arno and Vanessa Joubert, the property’s rooms were done in palettes of white and gray, with the occasional pop of purple and green. The high-ceilinged quarters were fitted with French windows that provide panoramic views of the capital’s UNESCO-protected district.

Gold is the dominant color in the Evocación Tobacco Lounge, where guests can enjoy Cuban cigars paired with cocktails. Meanwhile, birds were painted liberally in the yellow-and-white San Cristobal Restaurant. Birds also adorn Bar Constante, where they are placed side-by-side gold cages. Tourists who wish to indulge in retail therapy can do so at the shopping arcade, which sells Montblanc and premium cigar Cohiba Atmosphere.

A deluxe room’s rate starts from USD$344 per night during the off-season while a suite is priced at USD$1,300. 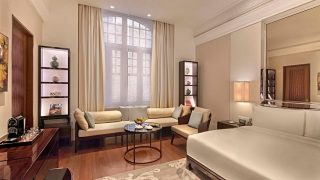 Valid for stays until September 30, the global promotion delivers discounts of up to 25 percent on r...