Underpinned by a sustainable ethos and a dedication to craftsmanship, Desa Potato Head will once again be an ideal base for fun-loving, eco-conscious travelers after it reopens on September 1. 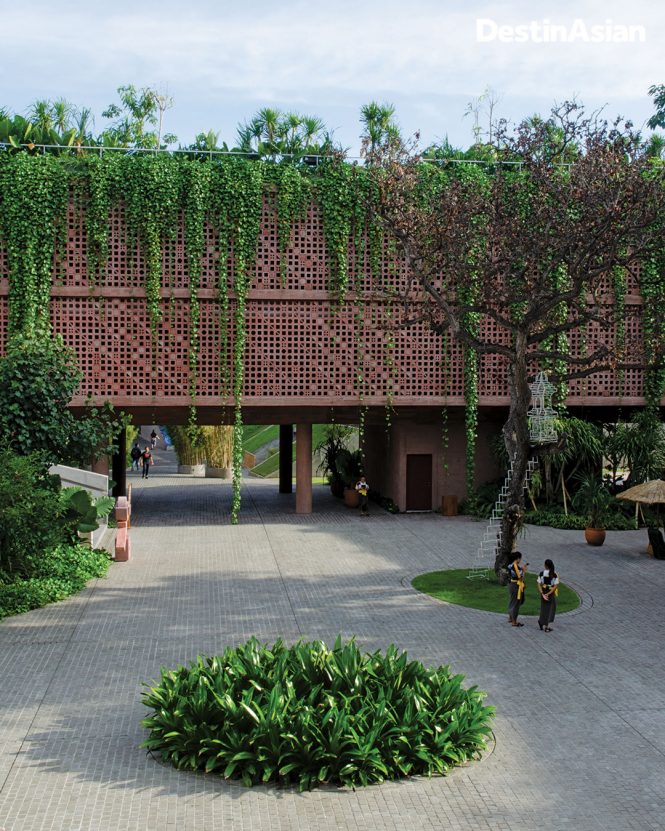 When young Indonesian entrepreneur Ronald Akili returned to his native Jakarta after 13 years in Hawaii, he was a man on a mission. “Back then, there was so little exposure of Indonesian contemporary art and architecture, or even Indonesian food, on the global stage. So the first thing I wanted to do was to put Indonesia on the map.”

He would get his chance in 2009 through Potato Head, a pet project with business partner Jason Gunawan that began as a casual Jakarta restaurant before branching out to Bali, where the two acquired a three-hectare beachside plot in Seminyak. The dream, Akili says, was to create an international lifestyle brand out of Indonesia, starting with the launch of Potato Head’s now-legendary beach club, which opened in 2010 below a Colosseum-like facade of vintage teak shutters. Its arresting design was conceived by leading Indonesian architect Andra Matin, whose long working relationship with Akili began with their collaboration over a residential project in Jakarta.

Next came Katamama, a show-stopping all-suite property also by Matin. Clad inside and out with 1.8 million hand-pressed red bricks, the hotel turned heads thanks to its architecture, its juxtaposition of vintage midcentury-modern furniture with traditional Balinese textiles, and cocktails made with house-infused arak, the island’s moonshine, at the Akademi bar. By then, Akili and Gunawan already had grand plans for the third and final phase of the Seminyak development. “The vision was, instead of just opening another resort, why don’t we make it a big creative playground?” Akili explains. He approached Dutch studio OMA (founded by Rem Koolhaas) for the job, a choice he puts down to its distinct architectural approach and expertise in cultural venues. Akili wanted a place where tourists could interact with local creatives and the wider community, setting an acclaimed New York contemporary art museum as a benchmark: “Imagine MoMA PS1, but with [guest] rooms. That was the brief.” 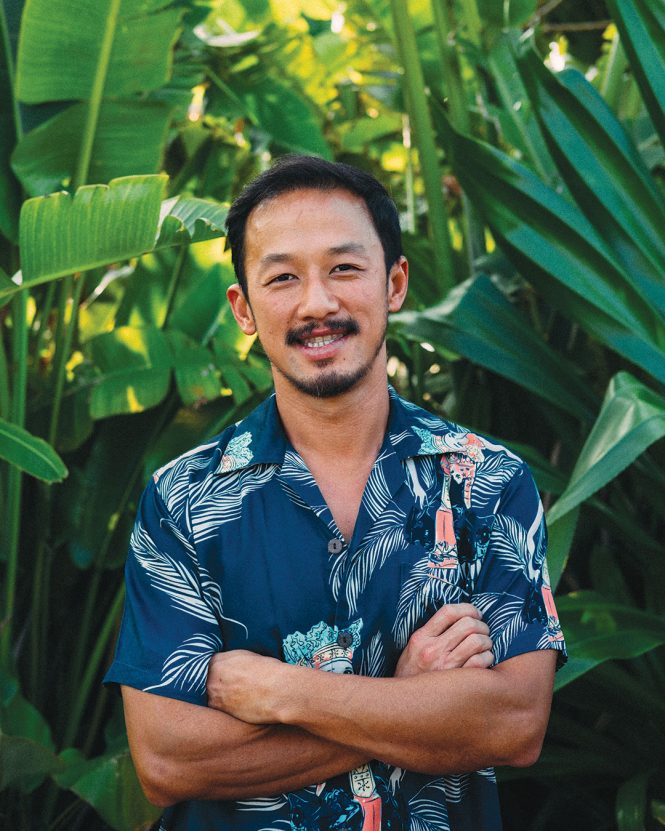 The result is Potato Head Studios, the latest and largest addition to the Seminyak complex, a “creative village” now known as Desa Potato Head (desa means “village” in Indonesian). Matin was brought on board as a design consultant for the project, and OMA’s team, led by managing partner David Gianotten, incorporated plenty of local nuances. For example, the building is lifted off the ground on hand-finished concrete piers in a nod to vernacular Indonesian architecture, leaving the ground floor open for cultural events. Upstairs, the geometric perforated facade on the guest room corridors represents the Balinese divination calendar, or tika.

OMA has also created a public processional route that rises from the courtyard and coils around it, snaking past the first-floor Studio Eksotika, an inviting multipurpose space populated by low sofas and a library well-stocked with books on music, fashion, surf photography, architecture and design, and anthropology; it’s both a co-working spot and bar, with a weekly music program that spotlights local talent through live performances and record listening sessions. Another highlight is the adjoining gallery, whose inaugural five-week showcase later this year will hone in on 1970s dance music culture.

Farther along the route, a zigzagging staircase leads to the soon-to-open rooftop Sunset Park. Home to a recording studio, a pop-up DJ booth operating on hydraulics, a plunge pool, and art installations galore, it will be just the place to look out over the beachfront area and its amphitheater, which occasionally comes to life at sundown, when a meld of traditional arts and modern performances riffs off the kecak dance. 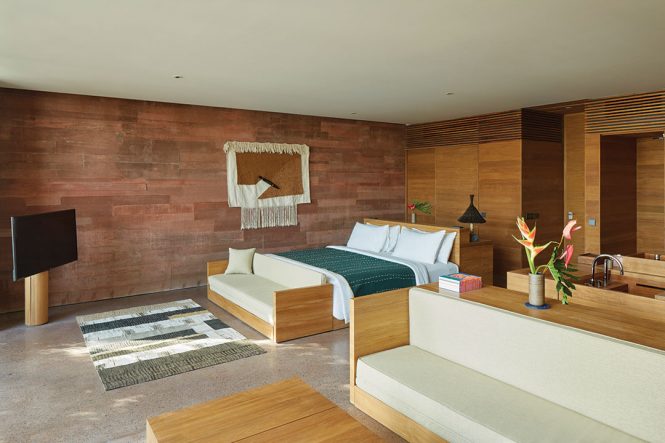 But that’s not all. Potato Head has been applying its creativity to major environmental issues, mirroring Akili’s ongoing pursuit of a healthier, more eco-friendly lifestyle. The company made history as Indonesia’s first carbon-neutral hospitality brand, and just three percent of all waste from the Desa goes to the landfill; the rest is managed in-house. “We want to show people that going zero-waste is possible and it’s not that hard,” Akili says. “Plus you can create good products out of it.”

This is borne out in the fittings that British designers Max Lamb and Faye Toogood made exclusively for the brand while working closely with Balinese artisans. Toogood’s sinuous rattan chairs and tables grace the areas around the main courtyard, and in Potato Head Studios’ 168 light-filled guest rooms—more compact and minimalistic than those at Katamama—Lamb contributed painterly desk chairs made of melted plastics locked in resin; the offcuts were repurposed as coasters, cookie jar lids, and boards for writing pads.

Indeed, a twin commitment to craftsmanship and a zero-waste philosophy inform every aspect of the interior design. OMA cast the textured concrete walls in molds of reclaimed wood to suggest brickwork, and Toogood’s wall hangings—along with the carpets, bed runners, and throws—were naturally dyed and handwoven at the rural workshop of Tarum Bali, an hour’s drive away. Various zero-waste items, like the tissue boxes and soap dispensers in each room, came courtesy of the brand’s own Sustainism Lab. These were created with a mixture of Styrofoam, oyster shells, plastic bottles and caps, and powdered limestone in a space just off The Womb, a woven bamboo tunnel by Balinese artist Nano Uhero that serves as an entryway to the Desa and a zero-waste gallery. 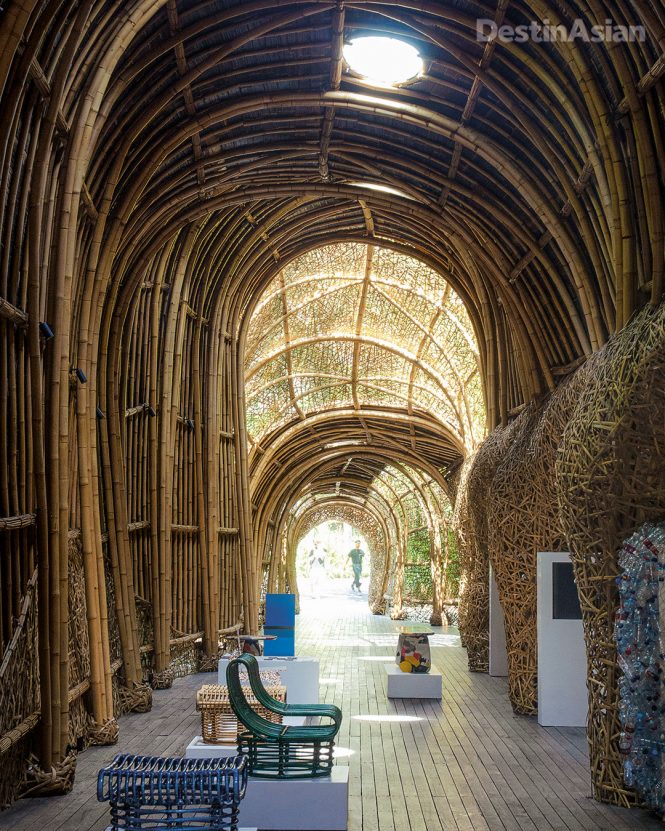 Taken together, The Womb and Sustainism Lab help to raise environmental awareness among visitors and guests of all ages. Hands-on workshops at the lab will soon become a regular feature of the Kids’ Club, and the coming months will see the opening of a bamboo-built playground, partially covered in flip-flops collected on beach cleanups around the island. In a sense, waste is literally embedded into the Studios: ceilings throughout the building’s public areas are woven from 1.7 tons of recycled plastic, while the walls owe their reddish-brown hue to broken bricks left over from Katamama’s construction, which were pulverized and mixed in with wet concrete.

That inventive approach to sustainability also extends to dining. Fish scales and unused rice grains go into the tasty crackers at Ijen, the zero-waste restaurant at the beach club, where patrons graze on line-caught local fish and seafood in an open-air venue built entirely from recycled materials. But the latest development on this front is Tanaman, Desa Potato Head’s new plant-based Indonesian restaurant. Housed in a domed, submarine-like structure below the Studios, it feels both ancient and futuristic, a neon-lit concrete cavern with an ocean-blue floor and furnishings. At the sunken central bar, mixologists stir up cocktails using native flora; all produce in the open kitchen is sourced directly from small organic farms in Bali’s central highlands.

Through Tanaman, Akili hopes to inspire people to eat more sustainably without being preachy. “We’re not saying, “Oh, you have to be vegan or you’re a bad person.” But what we’re doing is making very delicious food that just so happens to be plant-based.” He tasked executive chef Wayan Kresna Yasa to come up with a refined and progressive expression of the comfort food typically found in family kitchens and street-side stalls across the country, while staying true to its home-cooked flavors. Like Kaum, the brand’s pan-Indonesian restaurants in Bali, Jakarta, and Hong Kong, Tanaman doesn’t compromise on authenticity. “The last thing I want as an Indonesian,” Akili adds, “is to create a bastardized version of Indonesian food and make that go global.” 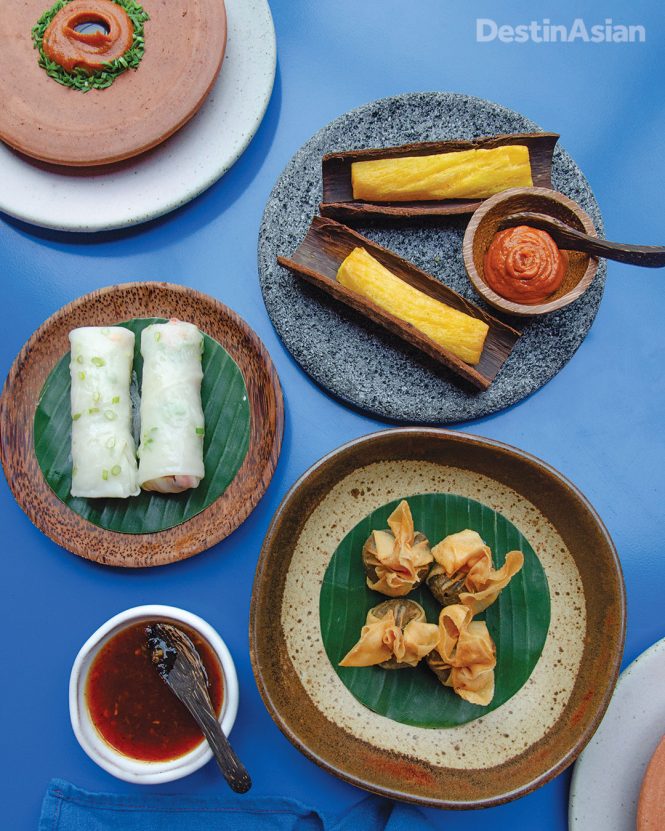 A multicourse dinner here opens with snacks like an inspired take on the Sundanese fried dumplings known as batagor, whose fillings swap out fish for field mushrooms. Some Indonesian diners have remarked that the soup course of sayur bening—spinach and corn boiled with fingerroot in a shiitake-based stock—conjures up their grandmother’s cooking.

Mains are no less enticing. Banana blossom takes the place of catfish or smoked stingray in Central Javanese mangut stew, but the star of the show is rendang nangka, a medley of young jackfruit, baby potatoes, and oyster mushroom braised in coconut milk for 16 hours to give it the melt-in-the-mouth texture one might find in beef rendang. And for dessert, Tanaman’s chefs have transformed the humble bubur sumsum (a sweet rice porridge) into something transcendent: coconut sorbet enveloped by pudding, topped with pineapple, drizzled in coconut nectar, and garnished with a cashew tuile. It’s almost too beautiful to eat.

The lesson, of course, is that what’s good for the body and for Mother Nature should be both beautiful and fun. Work is progressing on Potato Head Retreat—a two-hectare property up the coast in Tabanan that will focus on permaculture and wellness, with 10 modular beach cabins designed by Andra Matin and Japanese architect Kengo Kuma. Akili is also planning to take the brand’s global presence beyond its branches in Hong Kong and Singapore by adding a larger outpost in Los Angeles, but he’s just as excited about opportunities that don’t involve setting up physical locations. “The next thing we want to do is develop an experience arm for retreats and festivals. And we also want to go into products, whether it’s apparel or homeware or travel kits, all beautifully designed but done in a sustainable manner. That’s where I see Potato Head five years from now.” 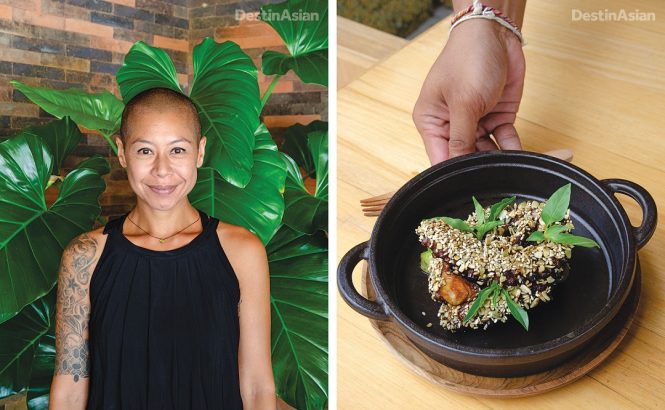 This article originally appeared in the April/July 2020 print issue of DestinAsian magazine (“It Takes a Village”). 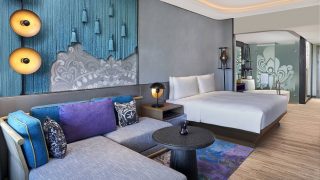 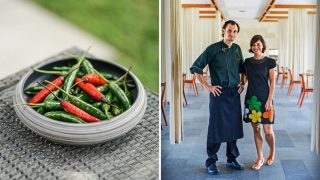 The popular Bali restaurant has plenty in store for traveling gourmands when they return to the isla...