Road tripping across the mountains and valleys of this Central Asian nation proves the perfect way to savor its surprisingly diverse cuisine. 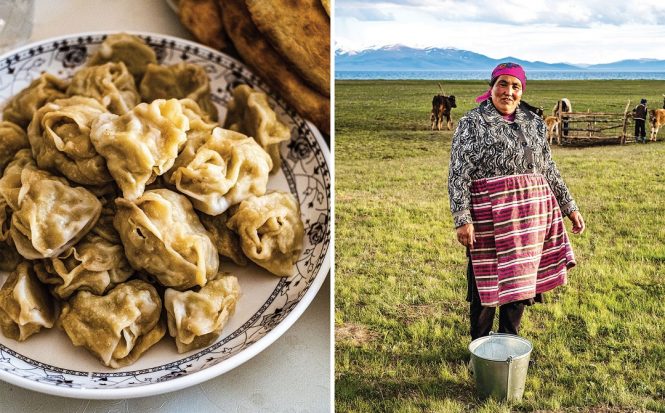 As I take another hesitant sip of the fermented mare’s milk, I concede with some regret that it is an acquired taste I am unlikely to acquire. Kumis, as this brew is called, is popular across Central Asia and regarded as a national drink in Kyrgyzstan. I had expected something similar to kefir or buttermilk. But no. Viscous, sour, and mildly alcoholic, kumis, to my taste buds at least, is like a fizzy liquid version of Poland’s pungent oscypek cheese — definitely not for the faint of palate.

It’s seven in the morning at our guesthouse in Bishkek, Kyrgyzstan’s Soviet-built capital, on our first day in the country. That’s perhaps too early an hour for an introduction to kumis, but it doesn’t stop us from appreciating the first show of Kyrgyz hospitality that will accompany us for the rest of the trip. In the breakfast room, a brightly patterned tablecloth is piled with delectables: homemade preserves, cream, and honey in crystal bowls; a platter of juicy apricots and plums; pillowy balls of fried dough called borsook; crepes and crispy blinis. Our hostess, a genial woman with little English but plenty of charm, plies us with black tea from a silvery samovar.

Kumis aside, it’s a promising start to our Kyrgyzstan road trip, which will take my boyfriend and I on a looping tour around the shores of Issyk Kul lake, across high cols and river valleys to the ancient Silk Road city of Osh, and on to the summer pasturelands at Song Kul, where we’ll stay at a yurt camp with a family of herders. Kyrgyzstan may be one of the smaller Central Asian republics, but the distances are still vast and the terrain is mountainous. The plan is to spend a couple of weeks on the road, but even that will just scratch the surface of this fascinating and beautiful land. 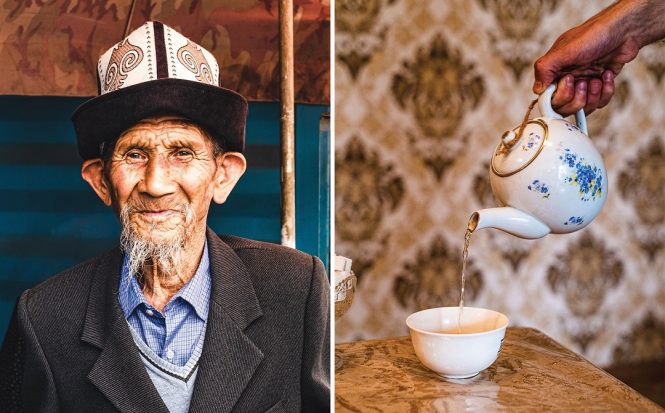 We leave Bishkek the next day and drive east to Issyk Kul, the world’s second-largest alpine lake after Titicaca in the Andes, and one of its most ancient. Every now and then the arid landscape turns bucolic as we pass through villages and fruit orchards. Roadside stands advertise cherries, raspberries, plump melons, and vegetables, including some of the reddest tomatoes I’ve ever seen.

Issyk Kul’s name means “warm lake” in Kyrgyz, a reference to the fact that its slate-blue waters never freeze, not even during the subzero temperatures of deepest winter. Sitting at an elevation of 1,600 meters, it’s a huge expanse — a veritable sea for landlocked Kyrgyzstan.

Back in the days when Kyrgyzstan was part of the Soviet Union, Issyk Kul was developed as a resort destination for Russian workers and cadres, with plush hotels and sanatoriums built along its northern shore. Yuri Gagarin was sent here to recuperate after becoming the first man in space; Leonid Brezhnev kept a dacha near the village of Semenovka. Most of the sanatoriums fell into decline after the collapse of the Soviet Union in 1991, though the spa town of Cholpon-Ata remains popular with beach-starved Kyrgyz and holidaymakers from neighboring Kazakhstan. After nearly four hours on the road, it also makes a good lunch stop, and we devour a platter of mutton pelmeni (Russian dumplings) with gusto. 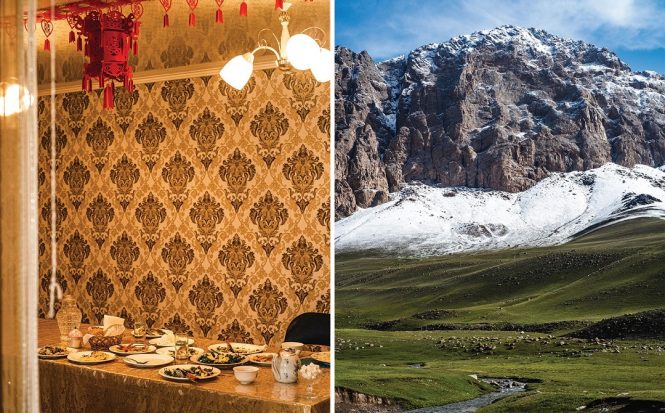 Left to right: A Dungan feast at Fatima Dautova’s house in Karakol; in the Alay Mountains, there’s snow even in the summer.

Karakol, Kyrgyzstan’s fourth-largest city, lies near the eastern end of the lake. Founded as a tsarist garrison town in the mid-19th century, it has a smattering of classically Russian houses as well as a stout wooden Russian Orthodox cathedral topped by golden onion domes. Karakol is also a gateway to the Terskey Ala-Too range of the Tian Shan mountains, making it popular with skiers in winter and hikers in summer.

We, however, have come to sample the food of the Dungans, a Muslim community descended from Hui people who fled western China in the 1870s to escape persecution. Of those who survived the arduous crossing of the Tian Shan, some found refuge in Karakol, where they built a colorful Chinese-style mosque with a pagoda-like minaret. They also brought with them their distinctive cuisine, which is rich in vegetables and spices.

At the home of a Dungan woman named Fatima Dautova, we’re shown how to make laghman, a dish of hand-pulled wheat noodles known in China as latiaozi. On her flower-filled terrace, Fatima neatly rolls out the noodle dough into long, thin threads, then, to prevent the strands from sticking together during cooking, she loops them around her outstretched hands like a cat’s cradle and bangs them on the table a few times before throwing them into boiling water. Once cooked, the noodles are stir-fried with chives, chili, and egg and served with a variety of other colorful dishes, my favorite being thin-cut potatoes with strips of beef.

Another Dungan specialty awaits us at the Ak-Tilek Bazaar: ashlyanfu, a spicy, vinegary cold noodle soup typically accompanied by Russian pirozhki (fried buns filled with mashed potatoes) to offset the tang. Ashlyanfu stalls take up an entire aisle of the market; we settle in at one called Elwira’s, which is clearly a local favorite. The lineup outside never seems to shorten. 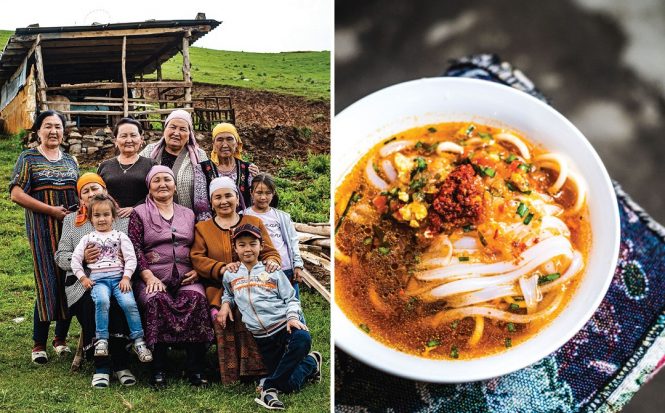 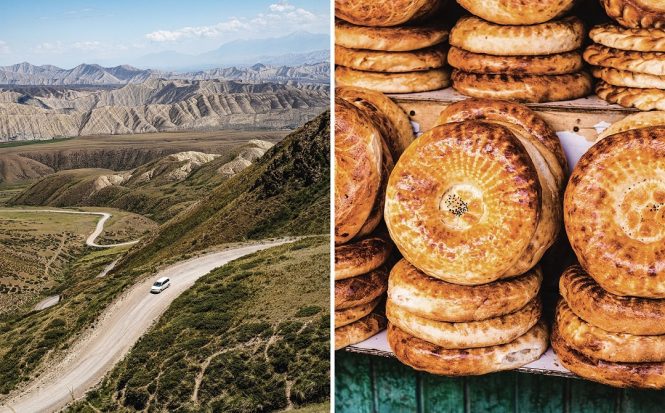 Left to right: Mountain scenery on the road to the Kara Koo Pass; rounds of freshly baked nan at a stall in Bishkek’s Osh Bazaar.

We depart Karakol early the next morning as the sun is rising over the snowy peaks. Skirting the southern shores of the lake, the road takes us over a spur of mountains before dropping down to the Naryn River, which we follow for several uneventful hours before arriving at the village Ak-Tal for the night.

Our route the next day is reputed to be the most thrilling drive in Kyrgyzstan. Traversing a succession of verdant valleys, it winds through plunging gorges and over lofty ridges. The steep, twisting ascent to the 3,500-meter pass of Kara Koo is rewarded with outstanding views: softly molded mountains stretch away endlessly in gradual shades of yellow, red, purple, and blue. Beyond the dust-blown village of Kazarman, we enter a sea of grassy steppe broken only by the occasional yurt or flock of sheep. Finally, where the southern ranges of the Tian Shan give way to the fertile lowlands of the Fergana Valley, we reach Osh.

Located a couple kilometers from the border with Uzbekistan, Osh was for centuries a key hub on the Northern Silk Road. Today more than half of the city’s inhabitants are Uzbeks, and their influence is clearly visible in the kitchen. Osh is famous for its plov, a pilaf-like rice dish that’s found across Central Asia and the Caucasus but that is a particular Uzbek specialty. We sample several versions, each seemingly more aromatic than the last. 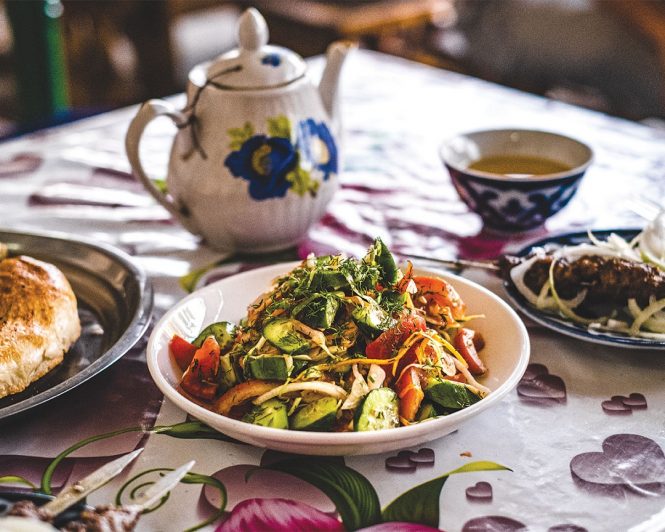 A tomato-and-cucumber salad and lamb shashlik at a riverside café in Osh. 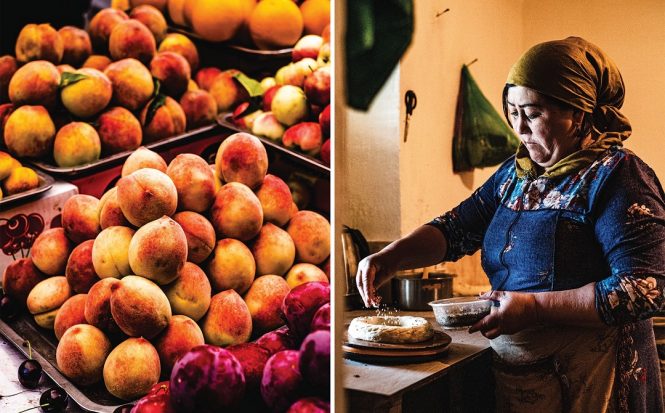 The kebabs at the Jayma Bazaar — said to be the region’s oldest market — are also delicious. Spiked with tender mutton or beef, the skewers are served with tomato-and-cucumber salad and golden discs of tandoor-baked flatbread called tandyr nan. A staple across the Turkic world, nan is a big deal in Kyrgyzstan, with countless bakeries turning out piles of the stuff every day.

Our local guide, Beksultan, takes us to a baker named Barno, who is busy preparing her next batch of bread. On a rotating tray, blobs of dough are turned into perfect circles in seconds; then they’re pinched up at the edges, brushed with milk, and sprinkled with sesame and cumin seeds before being placed in a clay oven.

Beksultan admits with a smile that way too much bread is eaten in Kyrgyzstan. It’s served with everything, even with another ubiquitous tandoor-baked item: samsa. Popular throughout the country, these savory hand pies are often deep-fried like their South Asian cousin the samosa. But the version you get in Osh — fist-size and stuffed with chopped mutton and onions — is slow-cooked on the walls of a tandoor. The fragrant broth that forms inside during baking is perfect for dipping nan into. It turns out that there is a method to this gluten madness. 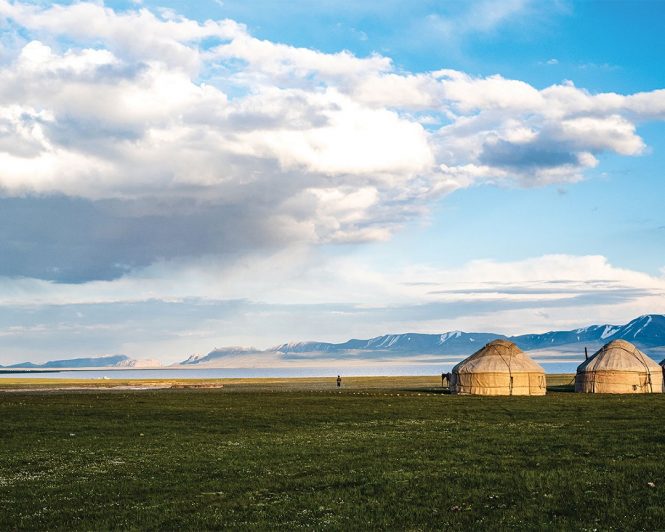 A yurt camp on the shores of Song Kul lake.

For most of the year, Kyrgyz herders live settled lives in villages, but from June to September, when the lowlands are arid, they move to alpine pastures known as jailoo. And few jailoos are as coveted as the meadowlands of Song Kul, a mountain-ringed lake some 125 kilometers southeast of Bishkek. As soon as the summer grasses begin to emerge, families move here to pitch their felt yurts, fatten their livestock, and live for a few months like their ancestors.

The Nazarovas are one such family, and we’ve arranged to stay at their camp for a couple of nights. We are given our own yurt to sleep in but join our hosts for meals, starting with afternoon tea, which is served at a low table with chunks of warm bread, tart homemade jam made from foraged blueberries, and a thick, scrumptiously fat cream known as kaymak.

Umutkor, the matriarch, soon starts preparing a plov, frying onions, carrots, and lamb with spices over a wood-fired stove. She stirs in red devzira rice and leaves the dish to simmer, filling the yurt with the aroma of cumin, coriander, caraway. I ask Umutkor about life in the jailoo. “It’s a lot of work, tending the animals, cooking over fire, baking bread,” she says. “But it’s better than in town. It’s beautiful here, and peaceful. My boys love it. They’re always running around, playing, riding horses.”

Our plov that evening is inevitably accompanied by a big jug of fresh kumis, the fermented mare’s milk that I’ve been trying to avoid since that first morning in Bishkek. Umutkor doesn’t have horses, so she trades cow’s milk for kumis with a neighbor. She assures me that the kumis from Song Kul is the best in all of Kyrgyzstan. Perhaps the crisp mountain air and the natural beauty of our surroundings has something to do with it, but it’s here, in a lakeside shepherd’s yurt under the snow-flecked peaks of the Tian Shan massif, that I finally drink a glass of kumis with genuine pleasure. 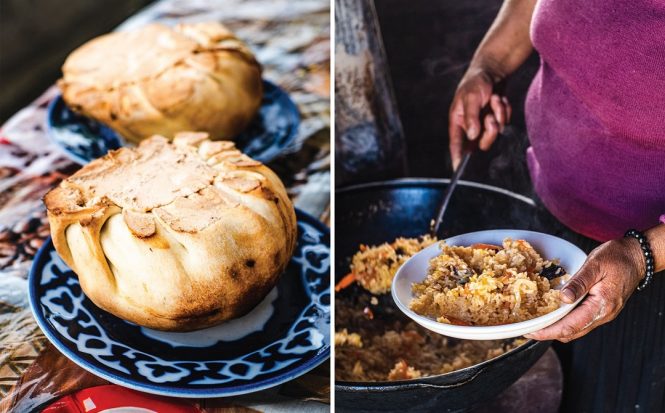 Left to right: A tandoor-baked samsa filled with minced lamb at a café in Osh; Umutkor dishing up plov, which she cooks in a heavy pot over a wood-fired stove. 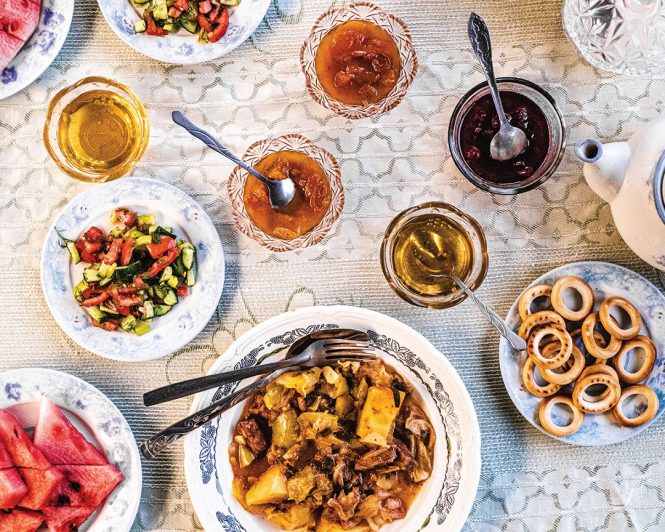 A lunch spread at a guesthouse in Arslanbob.

Getting There and Around

Filled with Soviet-era monumental art and architecture, orderly Bishkek is also home to a Hyatt Regency and a two-year-old Sheraton hotel. Those looking for boutique charm, however, should check into the 14-room Navat Hotel (doubles from US$85), a cozy option in the city’s historical district that’s just steps away from the Kyrgyz Opera and Ballet Theater and the National Museum of Fine Arts.

While tourism infrastructure is limited in the countryside, homestays and yurt visits can be set up through the Kyrgyz Community Based Tourism Association, which brings together 15 diverse destination communities across Kyrgyzstan.

This article originally appeared in the December 2021/February 2022 print issue of DestinAsian magazine (“A Craving for Kyrgyzstan”).