Above: the first resort on Palm Jumeirah, the Atlantis.

Left floundering after the global financial crisis wracked the United Arab Emirates, the Palm Jumeirah—an extravagant, 560-hectare man-made island off the coast of Dubai—appears to be making something of a comeback. Two new hotels, the Rixos Residences Palm Jumeirah and the Movenpick Royal Amwaj, are scheduled to open in the coming months, and Hilton recently confirmed plans to open a Waldorf Astoria on the island in 2013.

The upcoming openings suggest new optimism for the project, which has been alternately heralded as a symbol of Dubai’s ambition and panned as an emblem of its excesses.

The island’s first resort, the 1,500-room Atlantis, opened with great fanfare in 2008, and more than 30 additional luxury hotels were slated to launch in the following years. But development plans were suspended or scrapped altogether in 2009 after Dubai’s economy crashed. The Atlantis remained the sole operating hotel until November 2010, when One & Only, the Palm opened its doors. Earlier this year, two additional luxury properties were completed—Jumeirah Zabeel Saray in January, and the Kempinski Hotel & Residences Palm Jumeirah in September.

Even with these new openings The Palm is still falling far short its original development plans. But that may not be a bad thing—analysts already predict a 20% increase in Dubai’s hotel stock between now and 2013. 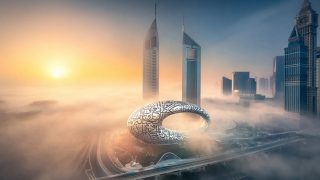