Despite being one of Thailand’s biggest islands—not to mention stunningly beautiful—Koh Kood remains a refuge from the crowds, thanks to local and government forces determined to preserve its natural, quiet charm.

Ice cream and nature. Everyone has their idea of paradise, and this is mine: kicking off my shoes somewhere isolated and beautiful and tucking into some sweet, cold dairy. On a mountaintop in southern Alaska, it required an inventive mix of snow, dried milk, and brown sugar. On a rainy motorcycle trip in central Java, a lunch stop at a tiny roadside warung vending fried grasshoppers and milkshakes turned out to be the highlight of the weekend. Although simple, it’s a surprisingly rare combination, which is why, when I was planning a short getaway to Thailand, Soneva Kiri caught my eye—a luxurious eco-resort on Thailand’s least populated island with a no-shoes policy and a “wall” of 60 flavors of homemade ice cream.

The latter factor is of course not what attracts most travelers to the resort. First, there’s its locale on Koh Kood, one of 52 sun-kissed islands in Thailand’s easternmost province of Trat, dotted about the reef-filled Gulf of Thailand directly west of Cambodia. And second, it’s exceptionally friendly to the environment. The United Nations World Tourism Organization has reported that ecotourism is the fastest growing sector in the tourism industry, and numerous surveys run by travel websites and agencies worldwide have found that roughly a fifth of travelers will pay more for a holiday with a company that has socially and environmentally friendly practices. My own prior experience with green hospitality had come at both ends of the spectrum: a cabin on an off-the-grid, self-sustaining coffee plantation in the Nicaraguan highlands—entirely impressive but entirely barebones—and the little notes littered around big-brand hotel rooms reminding me that linen changes are upon request and to please turn out the lights. With its “Slow Life” sustainability ethos and myriad awards attesting to its green initiatives both here and at its other location in the Maldives, Soneva Fushi, I was curious where the Soneva brand would fit in.

So it was that I found myself being whisked through Bangkok’s Don Mueang airport to where the resort’s eight-seat white Cessna waited on the runway. And after about an hour and a half spent staring out the window at islands passing like clouds in the water below, I was walking barefoot up the resort’s dock jutting out from the end of a pearly crescent beach, the jungle rising gradually behind, spotted here and there with graceful pitches of tented villa roofs. It was early evening, and everything was absolutely still, bathed in a peachy glow. “Turn back your watch one hour,” a staff member instructed me. “We run on Soneva time here.”

Creating its own time zone turned out to be one of the least of the measures Soneva Kiri has taken to set itself apart from the rest of the world, many of which, like the hours that drift by, are quite inconspicuous. As I situated myself in Beach Villa Nine, something felt different. Everything about it was lovely—the big white bed under a canopy hung from the vaulted bamboo ceiling, the open-air bathroom with a sunken jacuzzi and vanities built into large old trunks stood upright, the pool, the thick borders of trees that made the neighboring villas disappear. I couldn’t put my finger on what was missing, perhaps because I didn’t miss whatever it was. A nightcap of Thai tea ice cream, very sweet and roasty as the good kind often is, wooed me into not worrying about it.

The next morning, I spotted a barefoot couple make their way directly from breakfast to the ice cream wall, which was all the impetus I needed to follow suit before hopping in my villa’s golf cart to rove around and explore where I was. It didn’t take long to notice that everything here, from the 36 villas to the six restaurants, kid’s club, and spa, were built purely of bamboo and wood; with the exception of the staff quarters, the only concrete on the 41-hectare grounds was the road I was driving on, which was sided with wooden signs inscribed with the words GO SLOW! (perhaps less a reminder about speed than mindset) while passing through palm groves and hills of untouched forest so scenic that I began devising the most inefficient way to get from point A to point B. Often, one of those points was the long stretch of perfect, private beach, where a bunch of middle-aged Englishmen had taken to playing soccer on a field they redrew every day in the sand.

Questioning my Friday—Soneva’s Robinson Crusoe–inspired moniker for its butlers—about the resort’s green practices (Did they grow their own food? Where did they get the water to irrigate this massive place?), she told me to check out the Eco-Centro, a plot of land tucked on a corner of the grounds by the tennis courts. I followed her advice, and was quickly taken under the wing of its manager, Khem, a former farmer who in his two years working at Soneva has devised a whole range of ways to keep it green and getting greener. Leftover cooking oil from the restaurants’ kitchens is processed into bio-diesel in one part, which goes to fuel a tractor that makes wood chips in another, which are spread atop the 4,500 square meters of gardens that provide half of the produce cooked back in the kitchens—everything from cabbages and apples to holy basil and lemongrass, which he told me to rub on my arms as bug repellent. As he picked some extra-ripe passion fruits for me to eat later, he assured me that everything is organic, sprayed with a mix of galangal and microorganisms as a natural insecticide.

Linked between the gardens is a system of four ponds covered in Monet-like lily pads that filter enough rain and gray water to irrigate the entire resort, while four underwater wells provide all the potable water. And four rooms for plastic, glass and bottles, metal, and paper house all the sorted recyclables Khem brings to Bangkok once a month to cash in. Looking inside, the piles were astoundingly small, and it was then that I realized what I hadn’t been missing: trash. Aside from toilet paper and the wrapper of a toothbrush kit I’d requested, I hadn’t seen a single disposable thing since I’d arrived. 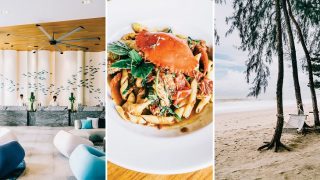