Some artists are so far ahead of their time that even centuries later, their genius is still breathtaking. This year marks the 400th anniversary of the death of one such master, the Cretan painter Doménikos Theotokópoulus, whose visionary and expressionistic religious works would have a profound influence on modern artists like Paul Cézanne and Jackson Pollock. Better known by his Spanish moniker El Greco (“the Greek”), Theotokópoulus, who settled in Toledo in the 1570s, is being commemorated throughout Spain with a series of exhibitions that gather together some of his greatest works—and shed new light on his intensely individual style.

In Toledo, El Greco: Painting and Master (Sep. 9–Dec. 9) at the Museo de Santa Cruz compares the artist’s own works with the replicas and variations made by his assistants and craftsmen. More than 90 paintings—some never before exhibited in Spain—will be grouped by title, including all 12 versions of the Apostolate of the Marqués de San Feliz.

For centuries following his death, the work of El Greco lay dormant, until the late 1800s when its rediscovery took flight. Exploring his influence on later generations of artists, El Greco and Modern Painting (through Oct. 5) at Madrid’s Museo Nacional del Prado focuses on his expressive style as manifested in modern art. Arranged chronologically by artistic movement, works hail from artists ranging from Manet to Pollock—not the least of whom is Picasso, who regarded El Greco as the most outstanding of the old masters. –Gabrielle Lipton 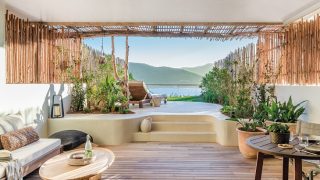 Sustainable luxury with a local twist beckons at this 116-room property overlooking the Med.