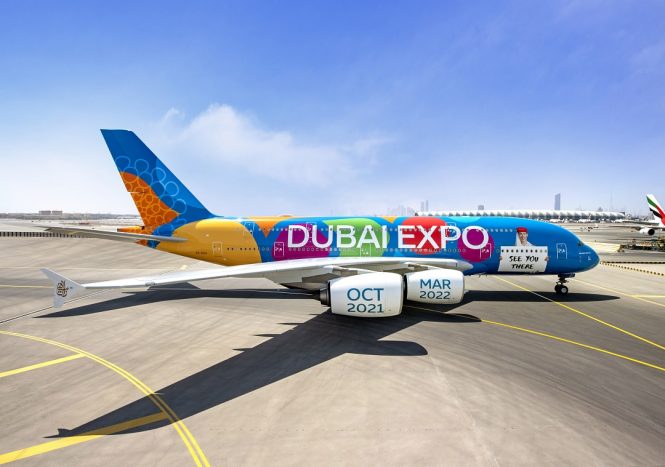 As the official airline of Expo 2020 Dubai, Emirates has pulled out all the stops in getting the word out to travelers about the six-month landmark event. Its latest tribute has taken the form of Emirates’ first-ever full-aircraft livery, which uses an A380 to carry the expo’s messages worldwide.

A bold departure from the airline’s traditional white and gold paint scheme, this bright blue aircraft livery features large-scale graphics in vivid green, orange, pink, purple and red that run across the fuselage and all the way up to the tail and fin. This is interlaced with the ring-shaped Expo 2020 Dubai logo, while the words “Dubai Expo” and “Be Part of the Magic” are emblazoned on the sides of the A380 fuselage. The engine cowls also carry the Expo 2020 Dubai messages and dates of the event.

In addition, both sides have been adorned with a decal of the Burj Khalifa stuntwoman in Emirates’ recent viral ad, with a message board that says “See you there” and “Dubai Expo Oct-Mar 2022.” Meanwhile, the carrier’s distinctive red belly, which can be only seen when the aircraft is flying overhead, has been replaced by the orange “Dubai Expo” branding.

The new A380 livery was designed, painted, produced and installed in-house by the teams at Emirates. Rather than relying only on decals, it was a complete paint project that involved completely stripping away the previous coat of paint, making it by far the largest such undertaking the airline has ever embarked on. The process of painting the livery design and applying the decals took 16 days and 4,379 man-hours to complete.

The new Expo 2020 Dubai livery will appear on three Emirates A380 aircraft to reaffirm the themes of one of the largest global events to take place since the onset of the pandemic. The blue aircraft will join 40 other expo-themed special liveries, which have collectively flown to over 130 destinations across the Emirates network since 2018. At the event, Emirates will be showcasing its own pavilion focused on the future of commercial aviation. 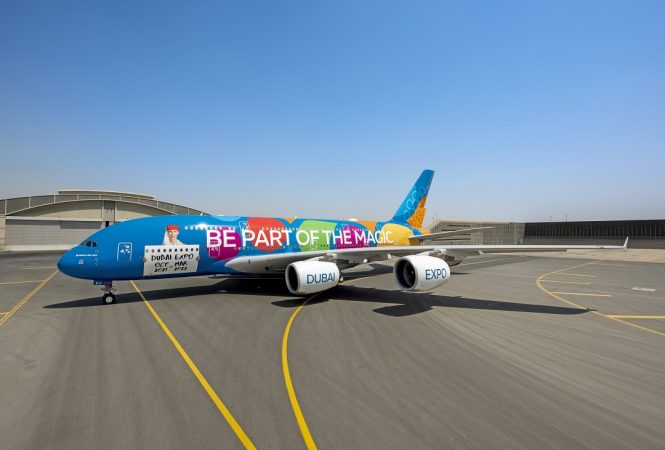